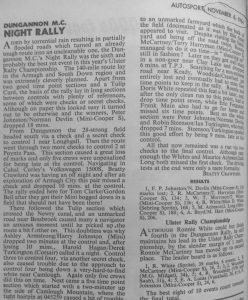 Aided by torrential rain resulting in partially flooded roads which turned an already
tough route into an uncleanable one, the Dungannon M.C.’s Night Rally was the sixth and probably the best yet event in this year’s Ulster Rally Championship. The 140-mile route lay in the Armagh and South Down region and was extremely cleverly planned. Apart from
two good time point selections and a Tulip Card sections the basis of the rally lay in long sections between controls and plenty of references, some of which were checks or secret checks. Although on paper this looked easy, it turned out to be otherwise and the winners, Peter Johnston/Norman Devlin (Mini-Cooper S) dropped 18mins.

From Dungannon the 28-strong field headed South via a check and a secret check to Control 1 near Loughgall. Then the route went through two more checks to Control 2 at Poyntz Pass. This section caused a great loss of marks and only five crews were un-penalised for being late at the control.

Navigating in Cathal Curley’s VW 1500S, Beatty Crawford was having an off-night and after an exploration of Armagh City, this pair missed a check and dropped10 mins at the control. The rally ended here for Tom Clark/Gordon Bell after they got their Mini bogged down in a field that should not have been there.

There followed the Tulip section which crossed the Newry canal, and an unmarked road near Bessbrook caused many a navigator an anxious moment until he picked up the route a bit further on. This doubtless was why Ashley Armstrong/Harry Johnston (Mini) dropped two minutes at the control, and, after losing 10 mins., Harold Hagan/Ian Turkington (Corsair) called it a night.

Control three to control four, via another secret check, also caused trouble due to the approach to control four being down a very-hard-to-find white near Camlough. Again only five crews did this on time. Next came a five time point section which started with a two-minuter up the side of Camlough Mountain, where the tight hairpin at 045259 caused a bit of trouble.

Control five to control six was easily on and caused no trouble to those in the running, but the next section was a different matter. This consisted of eight time points in some of the best rally country in Ulster near the Monaghan border and was not cleaned by a single crew. The first three minuter along the very JUICY white through 910290 caused great trouble due to an unmarked farmyard which the bulk of the field (decimated as it was by this time) appeared to visit.

Despite visiting the farmyard and being off the road twice, Ronnie McCartney/Terry Harryman (Mini-Cooper S) managed to do it on time; – is “shouting up” still in fashion? Later on they got well stuck in a no-goer near Clay Lake and dropped 6 mins. at T.P.3 Searching for a non-existent road near Ready, Woodside and Crawford got entirely lost and eventually had to miss four time points to keep in the rally.

Ronnie and Doris White repeated this feat a bit later, and after the only clean run to this point, had to drop time point seven, while Eric Ferguson/Frank Main also had to go home and missed six time points. Best of the whole section were Peter Johnston/Norman Devlin and Robin Steenson/Ian Turkington, who both dropped seven minutes. Steenson/Turkington spoiled this good effort by being nine minutes late at the control.

All that remained now was a run via two checks to the final control. Although easy enough, the Whites and Maurice Acheson/Jack Long both missed the first check. The driving tests at the end were a mere formality.