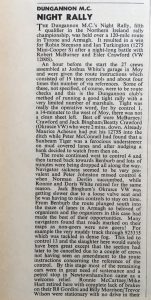 The Dungannon M.C.’s Night Rally, the fifth qualifier in the Northern Ireland rally championship, was held over a 120-mile route in Tyrone and Armagh.  It resulted in a win for Robin Steenson and Ian Turkington (1275 Mini-Cooper S) after a night-long battle with Robert McBurney and Esler Crawford (VW 1200S).

An hour before the start the 27 crews assembled at Joshua White’s garage in Moy and were given the route instructions which consisted of 19 time controls and about four times this number of via references.  Some of these, not specified of course, were to be route checks and this is the Dungannon Club’s method of running a good tight rally with a very limited number of marshals.  Tight was really the operative word, for by control 1, a 14-minuter to the west of Moy, there was not a clean sheet left.  Best off were McBurney/Crawford and Jack Bingham/Beatty Crawford (Okrasce VW) who were 2 mins. down.  Already Maurice Acheson had put his 1275S into the ditch while Peter McConnell had found that a Sunbeam Tiger was a ferocious understeerer on mud-covered lanes and after nudging a bank decided to watch from then on.

The route continued west to control 4 and then turned back towards Benburb and lots of minutes were being dropped all along the way.  Navigator sickness seemed to be very prevalent and Peter Johnston missed control 6 when Norman Devlin succumbed, while Ronnie and Doris White retired for the same reason.  Jack Bingham’s Okrasce VW was getting slower due to a loose valve seat and he was having to miss controls to stay on time.

From Benburb the route plunged south into the maze of lanes in Armagh so beloved of organisers, and the organisers, in this case, had made the best of their opportunities.  Many navigators found that roads marked on their maps as non-goers were now goers!  For example the very muddy track through 925335 which was tackled in dense fog. This led to control 13 and the slaughter here would surely have been great except that the section had later to be cancelled due to a couple of crews not having seen an amendment to the route instructions concerning the reference of the control.

By this stage, most of the remaining cars were in great need of sustenance and a petrol stop in Newtownhamilton came as a welcome relief.  Ronnie McCartney/Mike Hart retired here with complete lack of brakes on their R8 Gordini and Billy Morrison/Trevor Wilson were stationary with no drive in their 1275S (the seventh transmission failure in seven months1).  Roger Cree/Norman Smith had an interview with the police regarding the height of their spotlights and missed nearly all the remainder of the rally.

The second half of the rally started off just like the first with McBurney and Steenson both loosing 3 mins. and Noel Smith/Ricky Foote dropping seven at control 15.  It was now the turn of Terry Harryman’s navigator, Peter Lyster, to get an upset tummy.  After going very well in their N.S.U. 1000 they missed the last four controls as did Norman Thompson/ Norman Henderson after unspecified trouble with their Imp.  Only 13 cars arrived at the final control to contest the tie-deciding driving tests, where McBurney was fastest.

A two-mile run brought the cars back to Moy where a late supper, free of charge, was provided by the club. Here, everyone agreed that this had been a fine event.  However, one or two reports of inconsiderate driving by a few people were a bit disturbing and it is to be sincerely hoped that this sort of thing does not occur again.