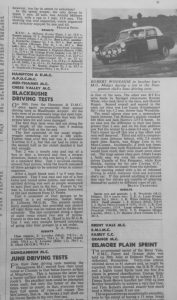 FOR their June driving tests meeting the Dungannon M.C. moved from their usual venue at Cluntoe to that better-known airfield at Megaberry. This is because the latter has a looser surface which is kinder to tyres (and roofs!). Six excellent tests could be attempted twice each, but only the better of the two times were to count; in fact, everyone took their full quota of runs-all except Des McCartney, that is. He broke a half shaft on his blown Sprite in the very first test.

Although the marking system might have appeared to have favoured the erratic but fast driver there was nothing erratic about Robert Woodside’s outright win. Recently Robert’s form has been a little below par, but this is probably due to the fact that he has been driving a standard VW 1200 right to the limit in order to compete with the more powerful Mini-Coopers. But in his brother’s Midget, which is ideally suited to the wide and fast
tests, he made few mistakes and took Best Time of the Day (B.T.D.) in four of the tests. The other two B.T.D.s were made by Spridget class-mates Ronnie White, who took third in the class, and Harold Hagan. Second overall and second in the open car class was Lee Lucas (Grasshopper Special.) who was 5.2 secs. slower than Woodside.

The small saloon class saw a tremendous battle between Ted Hobson‘s slightly tweaked 848 Mini and Jack Harris‘s 1275 S bomb. In no case was the difference in their test times greater than 2 secs. and on the final addition saw Ted the winner by a mere 0.4 secs! After Ted’s recent lay-off this was a fine effort and very well deserved. Third and still a comparatively close distance behind, with 2.4 marks more than Harris, was Roger Cree in his Mini-Cooper. Incidentally, if both test times had counted, then both Woodside and Hobson would have made their wins much more clear cut. The large saloon class gave Albert Lucas a fairly easy win over the enthusiastically driven Gazelle of Eric Ferguson, while Ken Shields, waiting for his new Cortina G.T., watched a little enviously from the sidelines.

The meeting ended with a bit of informal driving in which everyone tried out everyone else’s car. If this proved anything it showed that very few drivers are capable of adapting themselves quickly to different types of car.
BEATTY CRAWFORD.