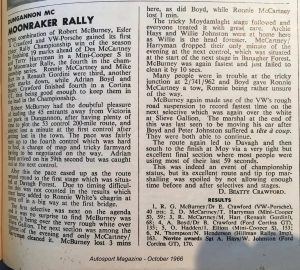 The combination of Robert McBurney, Esler Crawford and VW-Porsche gained its first Ulster Championship win of the season by finishing 19 marks ahead of Des McCartney and Terry Harryman in a Mini-Cooper S in the Moonraker Rally, the fourth in the championship series.  Ronnie McCartney and Mike Hart in a Renault R8 Gordini were third, another eight marks down, while Adrian Boyd and Beatty Crawford finished fourth in a Cortina GT, this being good enough to keep them in the lead of the Championship.

Robert McBurney had the doubtful pleasure of leading the 45 entrants away from Victoria Car Park in Dungannon, after haying plenty of time to plot the 53 control 200-mile route, and almost lost a minute at the first control after getting lost in the town. The pace was fairly easy up to the fourth control which was hard to find, a change of map and tricky farmyard having to be negotiated on the way. Adrian Boyd arrived on his 59th second but was caught out at the next control.

After this, the pace eased up as the route wound around to the first stage which was situated at Davagh Forest.  Due to timing difficulties, this was not counted in the results which must have added to Ronnie White’s chagrin at going off at the first bridge.

The first selective was next on the agenda and it was no surprise to find McBurney was fastest, it being over the very rough white over Slieve Gallion. The next section was among the tightest of the evening and only McCartney/Harryman cleaned it. McBurney lost 3 mins here, as did Boyd, while Ronnie McCartney lost 1 min.lost 1 min.

The tricky Moydamlaght stage followed and everyone treated it with great care. Archie Hays and Willie Johnston were at home here as Willie is the head forester! McCartney/Harryman dropped their only minute of the evening at the next control, which was situated at the start of the next stage in Banagher Forest. McBurney was again fastest and just failed to clean it by 10 secs.  Many people were in trouble at the tricky junction at 2/741 962 and Boyd gave Ronnie McCartney a tow, Ronnie being rather unsure of the way.

McBurney again made use of the VW’s rough road suspension to record the fastest time on the next selective which was again over the white at Slieve Gallion. The marshal at the end of this selective was last seen to be moving his car after Boyd and Peter Johnston suffered a téte a coup. They were both able to continue.  The route again led to Davagh and then south to the finish at Moy via a very tight but excellent final section where most people were using most of their last 59 seconds.

This was indeed an event of championship status, but its excellent route and tip-top marshalling was spoiled by not allowing enough time before and after selectives and stages.