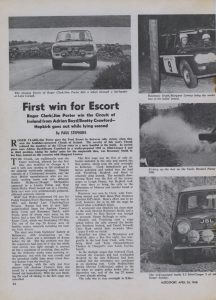 ROGER CLARK/Jim Porter gave the Ford Escort its ﬁrst-ever rally victory when they won the Gallaher-sponsored Circuit of Ireland. The severity of this year’s Circuit reduced the numbers of the 122-car entry to a mere handful at the finish. In second place were Adrian Boyd/Beatty Crawford in a works-prepared 1293 cc Mini-Cooper S and in third position, taking the ladies’ prize for the umpteenth time, was Rosemary Smith in her Imp, teamed on this occasion with Margaret Lowrey.

The Circuit, run traditionally over the Easter weekend, allowed for the first time cars modiﬁed to Groups 4, 5 and 6 with cars running in G6 confined to the separate works-only category. Despite rumours of a Continental invasion, only the three British manufacturers who are currently running teams sent cars, although Robbert McBurney / Reggie McSpadden appeared in a Lancia Fulvia and Noel Smith/Ricky Foott turned out in a Gordini. Both cars were very professionally prepared, although privately entered. 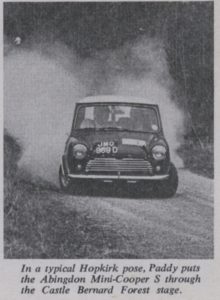 BMC had Weber-carburetted G6 cars for Paddy Hopkirk/Terry Harryman, who won in 1967, and Swedes Lars Ytterbring/Lars Persson. Rootes had two of their light-weight-bodied Imps for Andrew Cowan / Brian Coyle and Rosemary Smith, while Fords, most of whom were away on the Safari, had a lone G6 Escort Twin-Cam for Roger Clark, which was developing 152 bhp. The rest of the top 20 drivers were all familiar names, naturally including the leading Irish drivers.
The start was from Gallahers‘ factory at Ballymena; with scrutineering on the brief side, there was a minimum of drama before the off. The big problem was that the organizers had seen to it that the whole road section was tight enough to prevent all but a minimum of servicing, thus nullifying the elaborate works team servicing arrangements; but with the vast crowds and the attendant traffic jams, many crews foresaw danger from the word go.
Sure enough, with the rally just four minutes old Andrew Cowan’s Imp was struck by a non-competing vehicle and was forced out immediately. With the cars blocking the road all timing to the first stage was cancelled.
This first stage was the first of only six forests included in the rally and started the first section, which took the rally overnight to Killarney. Clark immediately got his horses galloping and rushed into the lead with Ytterbring, Hopkirk and Boyd in relatively close pursuit. The normally slow-starting Boyd won the first of the tarmac stages at Lough Henny, but Hopkirk took the next three to bring the rally to the Mountains of Mourne and another forest at Rostrevor.
Rostrevor was won by Clark, with Ytterbring second and Bob Bean/Paul Stephens (Cortina GT) third. Bean’s effort was to no avail, however, for as he left the stage he retired when a half shaft failed. 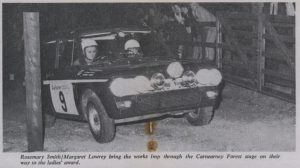 A wrong-slot cost Hopkirk his clean sheet on the road, likewise Rosemary Smith, and a 7-mins error by Don Barrow was enough to persuade Jimmy Bullough to retire.
Hopkirk and Ytterbring took a stage apiece before the rally crossed the border into Southern Ireland, and David Friswell Chris Nash retired their ex-works Mini-Cooper S with no clutch.
Breakfast was taken at Blessington and Hopkirk, after a fine first night, was marginally in the lead from Clark. with Ytterbring third and Tony Chappell/Hywel Thomas in Chappell’s own Lotus Cortina fourth.
In the daylight stages that followed Clark reversed the situation and had overhauled Hopkirk by the time Killarney had been reached, but the retirement rate continued at an alarming rate. Colin Malkin/John Brown (Rootes Californian) added to the
list when an engine pulley broke after an impressive run, and of the top 25 names, 11 were already missing.

The rally was to stop overnight in Killarney on Saturday and Sunday, and 12 stages were run during Sunday morning in the mountains south of Killarney and in the Bantry Bay area, starting with two 10.5-mile stages at Molls Gap and Borlinn.
A cancellation had meant that the Tim Healy stage could be used twice and although most people were quicker the second time around Roy Fidler/Barry Hughes (Lotus Cortina) were, in fact, slower when they had to coast the last mile or two with falling oil pressure.  This was soon righted and Fidler was able to maintain his sixth place on the leader board just a couple of minutes away from Tony Chappell.
Following an informal reception in Killarney, prizes were presented for performances on the Sunday stages and crews were able to enjoy a further night’s sleep before the final and longest leg back to Larne. Immediately upon the restart, Des McCartney was excluded for working on the car in pare fermé and brother Ronnie took over his place in the top ten.

Leslie Fitzpatrick/John Greive, who had been leading their class in their Triumph 2000, had bent a strut and were forced to change it; the change took only 9 min. It took Alun Rees and Derek Tucker 11 mins to change a subframe on their Mini which had suffered by their excursion on Tim Healy, but two stages later, at Breanagh River, Rees rolled and was out. He was in good company, for Ytterbring flipped on the same jump and the top ten gained two more spaces.
The rally, after five stages in the south-west corner of the island, headed towards Birr for two more forests, at Castle Bernard and Glenregan. Clark showed no sign of easing up and having won four of the first five stages he then proceeded to take both forests, before another long road section North to Enniskillen and a two-hour rest period at Killadeas. 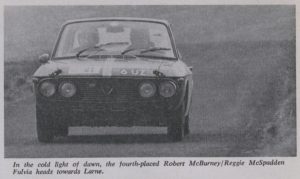 Although there were another 15 stages to go on the final section across to Lame, the leading ten crews were well separated, and it looked as though there would be no change on the leader-board when breakfast was taken, except between Fidler, Boyd and Chappell, who were dangerously close together. Ken Shields/Peter Lyster, whose spirited driving of the ungainly Vauxhall Cresta was almost frightening, had patched up a hole in their petrol tank and were able to continue their battle in the most fiercely contested class with Fitzpatrick’s Triumph 2000 and the equally spiritedly driven Rover 2000 of Toney Cox/Norman Salt.

Hopkirk‘s chase of Clark was ended on Lough Eske, the stage that claimed him in 1966 with Vic Elford, where the Mini broke its diff. Two stages later Ronnie McCartney lost his sixth place, and Fidler, who had been troubled by a faulty alternator, crashed, deranging his suspension too badly to continue.
By now Clark had eased off a little and allowed Boyd to win a couple of stages, but even so by the time the last few stages were reached in the Sperrin Mountains Chappell was second with Boyd third, and trying very hard.
Doug Harris, with Mick Hayward in a Porsche 911S, quite the most powerful and expensive car in the rally, retired at Owenreagh, and on the next stage at Glenelly, Chappell stripped his differential miles from his service car and was out.

Clark had taken a brand new model on to Hopkirk‘s own soil and beaten him very, very comprehensively. This Clark/Escort combination is going to take a lot of beating.