This report has been reproduced from Motor Week 1st November 1969
Report and Pictures by Esler Crawford. 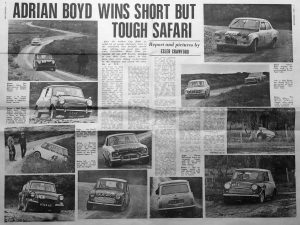 After the Scallon Cup Rally, an awful lot of people obviously came to the conclusion that daylight special stage rallying was good fun, and when Enniskillen Motor Club, for reasons all too well known, decided to run their Erne Safari in this form, they were almost embarrassed by the response and closed the entry list at 113.

As usual, the bulk of the entry was in the Novices class with no less than 70 cars. The Semi-Experts claimed 26 crews of whom at least one well-known competitor, who has competed several times in the Circuit of Ireland, should have followed the dictates of his conscience and promoted himself to the Experts Class.  As usual, the Expert Class was the smallest with only 17 crews and at least two of these would have been kinder to themselves had they entered as Semi-Experts.

The start was from County Cars just outside Enniskillen at 11 o‘clock last Saturday morning and as the cars lined up for the off to tackle 36 miles of stages connected to just over 100 miles of easy road-going, conditions were not too pleasant with a steady drizzle falling and a promise of fog on high ground.  Heading the field with No.0, by virtue of being a late entry, was Adrain Boyd in his immaculate yellow 1822cc works-engined Escort Twin Cam navigated by brother Derek who had got as far as Enniskillen clean on the road!

Running second was last year’s winner Ronnie McCartney with Robb Pollock in the familiar ex-works Cooper S.  Yellow seems to be the “in“ colour for hot Escorts at the moment and the Cathal Curley/Austin Frazer Twin Cam was looking resplendent in this bright hue.

For the first time since the Gallaher Circuit, the only BMW 2002TI in Ulster made a competition appearance with proud new owner Robert McBurney at the wheel and partnered by none other than David Agnew — maybe looking for a few tips about driving BMWs?  Fifth in the order was Ronnie White/Harold Hagan in 7300 LZ, the newer of Ronnie‘s two very hot Coopers, and sixth were Des McCartney/Norman Henderson in AIJ 8200 followed by John McClean/Hal Patton in old unfaithful Cooper S 6142 JZ.

Stage I was about 8 miles away at Belmore Forest.  Here the organisers had rather cleverly lengthened the stage over its usual 2.7 miles or so, by taking the cars in and out by the same entrance but in some parts the track was very soft and it looked as if it might cut up very badly – to the possible detriment of the Club’s finances.  Ronnie McCartney at once got down to business with the fastest time of 4 min 40 seconds – a full ten seconds faster than brother Des, Adrian Boyd and Robert McBurney.

Fastest times were as follows:

Already Joe Pat O’Kane was complaining of gear selection troubles with his Lotus and Adrain Boyd was lucky when his throttle cable broke after leaving the stage and to have Robert McBurney arrive on the scene to effect repairs.

The 7.5-mile Ballintempo stage followed close on hand.  This is one of the most dreaded stages in the country with its fast yumps and tricky bends on a road built up above the surrounding bog really sorting out the men from the boys.  I hope Robert McBurney won’t take this to heart when it is reported that he was the first to go off when the BMW developed a touch of excess understeer.  Luckily the car was not damaged but had to remain firmly in the morass until the whole field had passed by.

Others to suffer the same fate as the illustrious five times rally champ included Roy Johnston (Wartburg), John Lunn (Anglia GT.) George Wilson (Cooper). Mike Sloan (Cooper) and Trevor Fleming (Cooper). Fleming got to the end of this stage in another competitor‘s car and gathered together a posse of helpers with the exhortation that the car was just around the corner.  He omitted to mention that the particular corner was about three miles away!  On this stage Boyd showed his class with the fastest time of 10.17 but Ronnie McCartney driving really brilliantly, in an effort to make up for a relative shortage of power and was only 12 seconds slower.

Curley was in trouble with broken screen wipers and this was a daunting handicap not only because of the rain that was falling but also because of the large dirty puddles everywhere.  Later on, he jury-rigged a wondrous affair of sponges and bungee cords which Austen Frazer wielded to some effect, although he must have had a rather wet and sore left arm at the end of the day.

The 3.5-mile Conagher stage which followed was a more benign proposition, although Ronnie McCartney did manage to finish the stage going backwards which caused timekeeper George Beatty to move his car back a further 20 yards!

An hours petrol halt followed at Derrygonnelly where Adrian Boyd discovered that some rather odd braking effects were due to one of his non-standard rear discs having detached itself from the axle and it was completely removed by being burnt off. Despite this and the fact that Derek’s door threatened to fall off on several occasions — quite a novel way of getting rid of troublesome navigators — he was leading from Ronnie McCartney at this stage by just two seconds. Supporting his brother strongly, Dessie was 24 seconds further behind.

The second half of the event started with a repeat of the first three stages. On the second run, Belmore was understandably slower being quite badly cut up but Ronnie McCartney obviously liked this one with its very steep downhill section and was still fastest albeit ten seconds slower than the first time.

John McClean‘s jinx, which had temporarily deserted him of late, returned here with a vengeance and the Cooper expired with a broken diff, but at least the rain was showing signs of stopping which must have pleased Curley and Frazer. The evil Ballintempo followed again and at once Curley suffered the same fate as McBurney and parked the Escort where the BMVV had resided for a couple of hours earlier. Luckily however the same worthies who had rescued McBurney were still on hand and the Champion was back on his way with the amazingly small loss of only 21 seconds to Boyd who was again fastest.

Not so lucky was Terry Harryman whose game little NSU succumbed to a broken gearbox. This happened about two miles into the stage and navigator Norman Taylor must have done a couple of miles in about four minutes when he arrived back at the start of the stage in a very short time to summon assistance.

The second run through Conagher was fairly uneventful except that Ronnie White came to halt for reasons unknown and was not seen thereafter.

A relatively long cross country run into Co Tyrone brought the cars to the penultimate stage at Lough Bradan. This very fast stage saw the reappearance of the BMW, apparently nothing the worse for its earlier excursion, although McBurney obviously had little incentive for making a big effort.

This only left the last stage at Castle Archdale just a couple of miles from the finish at the Manor House, Killadeas and most people probably thought they were as good as home. But drama was in store.  The three mile stage was very narrow in places and had a liberal coating of mud and moss at certain points.  With concentrations perhaps tending to relax, the inevitable happened and there were wholesale excursions.

The one with the biggest effect on the results occurred when Curley slid off ever so gently but just could not get back on. A few minutes later Harry Cathcart repeated this trick about 20 yards further on breaking the steering in the process.  He and Geoff Morrison set about assisting the stricken Curley and eventually the Twin Cam was put back on the narrow and not so straight, but well outside the maximum time for the stage and well out of any of the major placings – a sad end to a good day’s driving in trying circumstances.

Another man with cruel luck was Jim Bovill, a promising novice who had been putting up some very good times. He was very badly baulked and as a result dropped from an almost certain class win, down to third place.  Aubrey O’Hara had a wizard prang when he completely misjudged a tricky S-bend just a couple of hundred yards from the start.  His Cooper demolished a stout concrete culvert wall and ended up nose down just above the water.  O’Hara and intrepid navigator Brian O’Kane emerged unscratched.  Aloof from all this fuss, Boyd set up yet another fastest time with Ronnie McCartney second.

Back in the comfort of the Manor House, run by one-time rally man Raymond “Baldy” Noble, the efficient results team soon had everything out on duplicated results sheets and this showed, not surprisingly, that Adrain Boyd was a reasonably comfortable winner despite his three-wheel braking. Ronnie McCartney was a good second and Dessie McCartney was very pleased to finish third without having to give the car any mechanical attention at all. Hill Scott was fourth, Robin Lyons fifth and Semi-Expert Baird sixth overall.

The Wilson brothers of Toome managed the very diplomatic trick of sharing eighth place but behind Andy Irwin — another Semi-Expert.  In the Novices Class, the result was very close indeed with less than a minute covering the first five places.  Jim Cathcart. Harry’s younger brother just pipped a quite impressive Rowan Bell with the unfortunate Jim Bovill third and Eric Boyce a splendid fourth in a standard Escort GT.

So ended a very satisfactory event which was well organised by Jonathon Isherwood and his team – there was hardly even a gripe to be heard about timing!