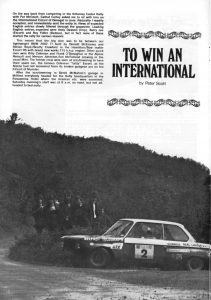 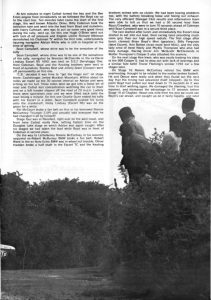 Words by Peter Scott, Photos by Richard Skeels and others unknown.

HOW TO WIN AN INTERNATIONAL

On the way back from competing in the Killarney Easter Rally with Pat McCourt, Cathal Curley asked me to sit with him on the International Circuit of Donegal in June.  Naturally, I readily accepted and immediately sent the entry in.  News of expected English entries slowly filtered through the grapevine.  Leading English entries expected were Andy Dawson (Imp), Barry Lee (Escort) and Roy Fidler (Datsun), but in fact, none of these started the rally for various reasons.

This meant that the big dice was to be between our lightweight BMW 2002 Ti built by Donald McEnaney and Adrian Boyd/Beatty Crawford in the Hamilton/Bowmaker Escort RS with brand new works 215 b.h.p. engine.  Other quick men were Billy Coleman and Frank D’Donoghue in the Alpine Renault and Mervyn Johnston/Ian McFarland crewing in the usual Mini.  The former crew were seen at scrutineering to have their spare car, the famous Coleman “tatty” Escort, as the Alpine had not recovered from its broken gudgeon pin on the Circuit of Munster.

After the scrutineering in Derek McMahon’s garage in Milford everybody headed for the Rally headquarters in the Rosapenna Hotel where the licences etc. were examined.  Saturday morning’s start was at 8 a.m. so most, but not all, headed to bed early.

At ten minutes to eight, Cathal turned the key and the BeeEmm engine fired immediately so we followed the Boyd car up to the start line.  Ten minutes later came the start of the first stage, the well known Atlantic Drive.  Billy Coleman took the initiative here and went into the lead from Boyd and ourselves, with Harry Cathcart, who was to put up some very good times during the rally, next up.  On this one, Hugh O’Brien went out with lack of oil pressure and English visitor Richard Atkinson demolished his Clubman ‘S’ within the first mile, unfortunately injuring navigator Adrian White who is still in hospital at the time of writing.

Sean Campbell, whose drive was to be one of the sensations of the rally, navigated by Brendan McConville in the ex-David Lindsay Escort RS 1600, was best on S.S.2 Derrylaggy One, from Coleman, Boyd and the Keating brothers were next in front of ourselves.  Stanley Best and Jimmy Greer (Cooper) went off permanently on this one.

‘C.B.’ decided it was time to “get the finger out” on stage three, Cashelnagor, below Muckish Mountain. Within about six miles we made up the 30-second interval on Adrian and were sitting on his tail.  Three miles later we got into a loose bit of road and Cathal lost concentration watching the car in front and on a left-hander slipped off the road at 20 m.p.h.  Luckily there were spectators near and we were lifted back onto the road losing a minute.  On this one Charlie Gunn ended his rally with his Escort in a ditch, Sean Campbell pushed his sump onto the crankshaft, Nicky Lindsay (Escort BS) was on the grass for a while.

Pat McCourt broke a fan belt on this stage in his borrowed Ronnie McCartney Triumph 2.5Pi and proudly told everyone that he had changed it all by himself!

Stage four was at Ranafast, right over on the west coast, and from here Cathal really flew, setting fastest time on the Dungloe Lake stage on which Adrian was again caught.  After six stages we had taken the lead while Boyd was in front of Coleman in second place.

On the way to Letterkenny Ronnie McCartney in his recently acquired ex-Robert McBurney BMW broke a fan belt, Robert Ward in the ex-Auto Extra BMW was in wheel nut trouble, Oliver Hadden broke a half shaft in the Escort TC and the Keating brothers retired with no clutch.  We had been having problems too, with the battery breaking loose and losing our exhaust.  The very efficient Donegal Club results and information team were able to tell us that we had a 50 second lead from Boyd/Crawford, who were in turn 70 seconds ahead of Coleman while Sean Campbell was in a secure third place.

On the next stage Ken Irwin, who was easily leading his class in the 999 Cooper S, had to drop out with lack of bearings and a similar fate befell Trevor Fleming’s similar 1293 car a few stages later.

On Stage 16 Ronnie McCartney retired the BMW with overheating, thought to be related to the earlier broken fan belt.  He and Dessie were really sick when they found out the next day that the only thing wrong was that the timing had advanced itself (slipped).  Up to this point, Boyd had pulled our lead down to 15 seconds so it was time to start working again.  We damaged the steering, had this repaired, and increased the advantage to 22 seconds before Stage 18 at Clogheen.  About one mile from the end we could see
Boyd’s car ahead, and caught up on it fairly rapidly, and later he let us past.   At the start of the next stage we heard he was out with a broken universal joint on the prop shaft.  We eased off from here on, but Cathal was still fastest on two out of the three stages from this to the end of the first day.  Ashley Armstrong was having diff problems and found the Mini hard to hold on the straights.

When the Saturday results came out we had a four-minute lead from Billy Coleman who was another three ahead of Sean Campbell who was in turn two up on Mervyn Johnston.  David Agnew in the other BMW was next 20 seconds behind Mervyn (David was held up for a couple of minutes behind the Charlie Gunn incident).  Next were Eamon Cotter and Tom Lawther (BMW and Cooper S).

To allow those who had celebrated too long on the Saturday to recover, the Sunday start was not until 11 a.m. and in fact, we left a couple of minutes late to facilitate the Telefis Eireann cameras who were taking a film from a helicopter.

Fastest cars on the first stage were the 200 b.h.p. Escort of Micky Barry and Ray Murphy and the Cathcart/Morrison Cooper S who tied, ahead of Campbell, Johnston and Agnew.  “Big Derek” McMahon hit a bridge on this one, but continued.  On the second stage, at Glen, Coleman was trying too hard and went off for about 30 seconds, spectators lifting the car back on.  Stage 24 saw quite a few people having problems, with Mick O’Connell having a strut fall out in his Escort, Gerry Roche putting his BMW off, Rodney Burrows/Brian Quinn doing the same thing and our infamous Editor and his wife retiring their Imp Sport with a blown head gasket.  Our BMW yet again lost a silencer here and Eamon Cotter, who had been putting up a remarkable performance in his 2002Ti lost 15 minutes when his gear linkage came adrift.  Pat McCourt had retired the Triumph when the diff went.

Truskmore, right up in the north of Donegal, came next and since it was twisty and bumpy we took things very easily, Coleman beating us by 23 seconds.  (Cathal described it as a glorified autotest.  S.S.26 was the fabulous Knockalla stage, which Cathal knew reasonably well.  I have never enjoyed a stage so much or gone round corners so quickly—fabulous.  For the 12.64 miles, we took 11 mins. 35 secs., and Agnew was next on 11.55.  English visitor David Palmby in the Datsun had a monumental spin on this, and local man Robert Ward did not reach the start as his diff had failed.  The BMW led the Escort on the next two stages and then came Knockalla again.  By this point, David Agnew was out with transmission problems and Noel Smith in the ex-Mattie McNamara Escort RS suffered water pump failure.

This time Coleman was next on Knockalla, but still quite far back.  Arnie Poole in Alec’s ex-racing BMW was starting to put up quick times in this Schnitzer engined car, but was having steering problems.  Jim McClement’s Cooper S blew up due to over-revving in top gear.  Leslie White and Drew Todd, who now have the ex-Dessie McCartney engine and gearbox in their TC, were appearing with quick times.

At the last service point it was found that the BMW’s rear left wishbone was cracking so we took the next two stages fairly easy, but on the last one, Atlantic drive again, had a bit of a throw to keep the large crowd of spectators happy.  The finish line was reached with the wheel at a peculiar angle, and the wishbone broken.  It wouldn’t have lasted another stage.  When the final results came out Cathal had won by five minutes and Coleman was the same distance ahead of Campbell.