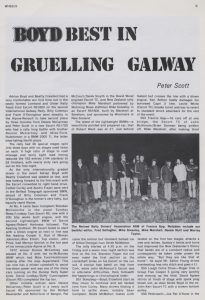 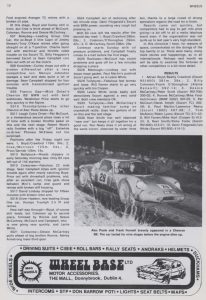 Adrian Boyd and Beatty Crawford had a very comfortable win first time out in the newly formed Lombard and Ulster Rally Team Ford Escort RS1800 on the second International Galway Rally. Billy Coleman and Frank O’Donoghue went steadily in the Alpine-Renault to take second place by three minutes from Dessie McCartney and Peter Scott in a new Escort RSl7OO who had a rally long battle with brother Ronnie McCartney and Mike-Ford-Hutchinson in a BMW 2002 Ti, the latter crew taking fourth place.

The rally had 36 special stages split into three days with six stages used twice on each. A high ratio of stage to road mileage and fairly tight road timing reduced the 163 entries (144 starters) to 53 finishers, with nearly sixty cars going out on the first night.

As the only internationally graded driver in the event Adrian Boyd with Beatty Crawford was seeded at one, and was looking forward to his first event with the Escort converted to right hand drive. Cathal Curley and Austin Frazer were next in the Belfast Telegraph sponsored BMW, ahead of Billy Coleman and Frank O’Donoghue in the former’s very tatty, but equally rapid Alpine.

At No. 4 came Sean Campbell/Brendan McConville in the usual Sunday News/Lindsay Cars Escort RS, now with a 200 bhp works built engine, and the second lightweight BMW of David Agnew/Robert Harkness followed. The Keating brothers’ RS Escort failed to start with a blown engine so next in line was the leading Cooper S, that of Mervyn Johnston/Alan Elliott. Top visitor, John Price, had Mervyn Gerrish in the hot seat of his immaculate Alpine at No. 8.

1972 winner Ronnie McCartney was seeded at No. 9 with the ex-McBurney BMW which had Mike Ford-Hutchinson looking after the map department. This car now has a milder camshaft to assist low-down power and was one of the many cars running on the Dunlop Rally Super tyres. David Lindsay/Duffy Cunningham (Escort RS) completed the top ten.

Other notable entries were Dessie McCartney/Peter Scott in a newly built Escort RS sponsored by the Belfast Newsletter and Motortune of Bangor, Pat McCourt/Derek Smyth in the David Wood engined Escort TC, and New Zealand rally champion Mike Marshall partnered by Motoring News staffman Mike Greasley in an Escort RS1800, built by Marshall at Boreham, and sponsored by Woolmark of New Zealand.

The latest of the lightweight BMWs, a beautifully painted and prepared car, was that of Robert Ward was at 27, and behind came the similar but standard bodied car of fellow Donegal man Derek McMahon.

The rally started at 4.30 p.m. on the Friday and a seven-hour night section was first on the list.  Brendan Fagan did not even make‘ the first section as the crankshaft broke on his Escort on the run out. A similar fate befell an Imp from Cork, while John McAlorum‘s Escort was in alternator difficulties. Here followeth the happenings in chronological order:

SS1 Boleybeg—Boyd/Crawford start as they mean to continue and set fastest time from Curley. Many drivers finding it hard to settle down, notably Sean Campbell. Derek McMahon makes sixth fastest but crosses the line with a blown engine. Ken Bolton badly damages his borrowed Capri 3 litre. Leslie White (Escort TC) breaks turret and has to revert to standard shock absorbers for the rest of the event.

SS3 Francis Gap—16 cars off at one bridge, the Escort TC of John McAlorum/Brian Dorman being written off. Mike Marshall, after making third fastest on the first two stages. attacks a tree and retires. Galway’s twists and turns had disproved the New Zealander’s theory that bends are of a constant radius and consequently be taken under power the whole way. “But they are like that at home”. he says! Mr. Editor Young drives overheating Imp into ditch and goes o.t.l.

SS5 Lough Cutra Drive—Roger Cree in Group Five Cooper S going very quickly and moving up the field. David Agnew retires at finish of stage with spark plug blown out, as does Derek Boyd in the ex-John Kerr Escort TC with a broken bottom pulley.

SS6 Peterswell—Joe Pat O‘Kane in the Ford engined Avenger TC retires with a broken oil pipe. At this stage. Boyd and Curley still in front, but Cree is third ahead of McCourt, Coleman, Ronnie and Dessie McCartney.

SS7 Boleybeg 2—Leading Group One Car, the ex-Boyd 3 litre Capri of Jimmy Stewart/Tony O‘Kane retires after going straight on at a T-junction. Charlie Gunn out with electrical and throttle cable trouble on his Escort TC. Billy Ferguson’s borrowed Escort (a Sean Campbell car) falls out with oil on the clutch.

SS8 Knocktee 2—Curley drops out with a broken differential after a very competitive run. Mervyn Johnston savages a wall and does quite a lot of damage. Sean Campbell stopped for four minutes with transistorised ignition trouble.

SS10 Thoorballylee 2—The other Chevron of Alec Poole blows up.

SS11 Lough Cutra Drive 2—Pat McCourt, in a tremendous second place overall, loses a lot of time with a broken throttle pedal on this and the next stage. Robert Ward’s rally finishes with a big “off”. Erstwhile co-driver Phonsie McElwee not too surprised.

SS15 Corkscrew—Fabulous 22 mile stage. Sean Campbell stops with ignition trouble again after nearly catching Boyd. Price out with driveshaft problems, and, after an excellent run, Cree gets stone between Mini’s sump and guard and retires with broken diff housing.

Now half way through—Boyd, of course still leads, but Coleman up to second place, followed by Ronnie and Dessie McCartney, Pat McCourt, Sean Campbell, who is now going very quickly, and Leslie White.

Coleman starts Sunday with oil pressure problems, and Campbell finally comes to a halt before the first stage.

SS26 Rocklawn—McCourt has clutch problems and goes off for a few minutes dropping a place.

SS29 Tullykyne—Fabulous fast tarmac and loose. Will Farren starts to go very quickly with his Cooper.

SS36 Noel Smith has well observed “near one” but keeps it all together for a good run. Ron Neely does it all wrong at the same corner, observed by sister Irene but, thanks to a large crowd of strong spectators, regains the road for a finish.

Results came out quickly, but competitors had to pay to get into prize giving—a bit off! In all a really fabulous event even if the organisation was not quite up to last year’s very high standard.

In this chronicle I have, for reasons of space, concentrated on the doings of the top twenty or so. There were many, many more stories and happenings, as in all internationals. Perhaps next month we will be able to examine the fortunes of other competitors in a bit more detail.