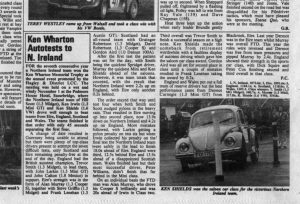 FOR the seventh consecutive year a Northern Ireland team won the Ken Wharton Memorial Trophy at the annual event promoted by the Hagley & District LCC.  The meeting was held on a wet and windy November 1st at the Pedmore House Hotel, Stourbridge, where the Northern Ireland team of Hill Scott (1.3 Midget), Ken Irwin (1.3 Mini GT) and Ken Shields (1.6 VW) drove well enough to beat teams from Eire, England, Scotland and Wales.  The teams finished in that order with only 45 seconds separating the first four.

A change of date resulted in Guernsey being unable to attend but there were plenty of top-class drivers present to attempt the seven difficult tests, only Scotland and Eire remaining penalty-free at the end of the day.  England had the British autotest champion, Trevor Smith (1.3 Midget), to lead them, with John Larkin (1.3 Mini GT) and John Calton (1.8 Mexico) in support.  Eire’s strength was in the form of Alan Murray (1.3 Cooper S), together with Steve Griffin (1.3 Midget) and Frank Lenehan (1.3 Austin GT).  Scotland had an all-round team with Grainger Robertson (1.3 Midget), David Robertson (1.3 Cooper S) and Gordon Aird (1.0 Datsun 100A).

After the first test the pattern was set for the day, with Smith being the quickest Spridget driver, Murray the quickest Mini and Ken Shields ahead of the saloons.  However, it was team totals that counted, with the result that Northern Ireland were 2.2s up on England, with Eire only another 0.2s behind.

The order stayed that way until test four when both Smith and Scott nudged pylons in the heavy rain. That resulted in Eire moving up into second place, now 13.9s down on Northern Ireland and 4.2s up on England. More mistakes followed, with Larkin getting a pylon penalty on test six but when Irwin collected his penalty on the final test the Northern Ireland team were safely in the lead to finish 18.0s ahead of Eire.  England were third, 12.5s behind Eire and 13.9s ahead of a disappointed Scottish team.  Wales finished last but their most successful driver, Peter Williams, didn’t finish that far behind in the Mini class.

On an individual basis, the FTD man was Alan Murray, who drove his Cooper S brilliantly and was 20s ahead of Irwin in Class two.  Third overall was Trevor Smith to finish a successful season on a high note. Ken Shields made the comeback from retirement worthwhile with a faultless display of autotest driving which gave him the saloon car class award.  Gordon Aird was all set for second place in class until a couple of mistakes resulted in Frank Lenehan taking the award by 0.2s.

England and Wales put out a full team of reserve drivers but the best performance came from Dermot Carnegie (1.3 Mini GT) from Blackrock, Eire.  Last year Dermot was in the Eire team whilst Murray was overall FTD.  This year the roles were reversed and Dermot was free from team pressures and pipped Murray by 2.4s. England showed their strength in the sports car class, with Dick Squire and Peter Cox finishing second and third overall in that class.