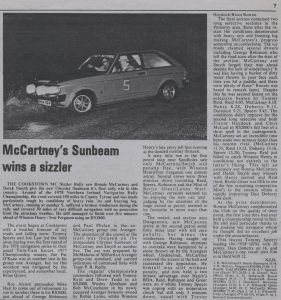 THE COOKSTOWN MC Sizzler Rally saw Ronnie McCartney and Derek Smyth give the new Chrysler Sunbeam it’s first rally win in this country.  A round of the 1978 Northern Ireland Navigation Rally Championship, the event covered 150 miles in County Tyrone and was made particularly tough by conditions of heavy rain, ice and freezing fog.  McCartney, running at number 5, suffered a broken windscreen during the rally and covered 30 miles of very difficult navigation with no protection from the atrocious weather.  He still managed to finish over five minutes ahead of Winston Henry/Ivor Ferguson using an RS1800.

The event began at Cookstown with a weather forecast of icy roads and falling snow.  Tommy Speers and Joe Law led the field away having won the first round of the 1978 navigation series in their usual Twin-Cam Escort.  1977 Championship winner, Joe Pat O’Kane, was at number two in his group one Avenger, but on this occasion was navigated by the experienced, and somewhat local, Brian Quinn.  Roy Alcorn persuaded Mike Hart to come out of retirement to run at number three in his RS1600, just ahead of George Robinson and Paul Phelan in the ex-McCartney group one Avenger.

The attention of the crowd at the start was focused on the immaculate Chrysler Sunbeam of McCartney and Smyth at number five.  The car was prepared by McMahons of Milford to Avenger group-one specification and carried an indication of continued links with Team P. R. Reilly.

The regular championship contenders followed with Tommy Reid and Drew Todd in an RS2000, Wesley Abraham and Bob McCutcheon in his newly acquired Avenger, formerly owned by Robin Lyons, whilst Winston Henry’s late entry left him running at the dreaded number thirteen.

A sixty-mile run to the first petrol stop near Sandholes saw only McCartney/Smyth still penalty-free, with Winston Henry/Ivor Ferguson one minute astray.  Several crews were three minutes down including Reid, Speers, Robinson and the Mini of Bertie Greer/Lenny Weir.  McCartney certainly seemed to be enjoying the new car, and judging by the attention of the huge crowd at petrol, seemed to be favourite in more ways than one.

The restart, and the section nearest Dungannon, saw McCartney arrive at the second petrol some forty miles later with still zero penalties, but minus the windscreen.  Having caught up with George Robinson, attempts to overtake were hampered by a stone thrown up by the Avengers wheel.  Undeterred, McCartney removed the screen at the halt and reassessed the opposition.  He himself was still without penalty and now held a two-minute advantage over Henry’s BDA.  Reid, Robinson and Greer were all on 4 whilst Tommy Speers was coping with an inoperative clutch but still only 5 minutes down, equal with Trevor Haydock/Brian Rowan.

The final section contained two long selective sections in the Pomeroy area.  Soon after the re-start the conditions deteriorated with heavy rain and freezing fog making McCartney’s progress somewhat uncomfortable.  The icy roads claimed several drivers including George Robinson who left the road soon after the start of the section. McCartney and Smyth forged their way ahead despite the lack of windscreen (“It was like having a bucket of dirty water thrown in your face each time you hit a puddle, and there were plenty of those” Ronnie was heard to remark later).  Despite this, he was second fastest on the first selective, beaten only by Tommy Reid.

The conditions didn’t improve at all for the second long selective and both Trevor Haydock and Chris McCaul in RS2000s fell foul of a short spell in the undergrowth.  McCartney set an incredible time here some two minutes faster than his nearest rival.

Tommy Reid just failed to catch Winston Henry in conditions not entirely to the latter’s liking.  This left an extremely wet Ronnie McCartney and Derek Smyth easy winners with Henry second and Reid third.  Bertie Greer was fifth in one of the few remaining competitive Mini‘s in the country, whilst a rapidly improving Dan Doherty took sixth.

At the prize distribution, Ronnie McCartney complimented the Club on the quality of their event, the first time they had ever held a championship round in fact.  He also paid particular thanks to his soaking wet navigator whom he thought did an excellent job under the circumstances.

This leaves Tommy Speers leading the 1978 series with 20 points, Dan Doherty on 16. and McCartney’s one result puts him in at third with 12.