This article was reproduced from Carsport Magazine March 1983. 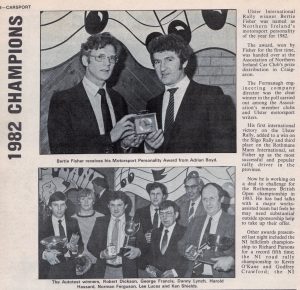 Ulster International Rally winner Bertie Fisher was named as Northern Ireland‘s Motorsport Personality of the Year for 1982.  The award, won by Fisher for the first time, was handed over at the Association of Northern Ireland Car Club’s prize distribution in Craigavon.

The Fermanagh engineering company director was the clear winner in the poll carried out among the Association‘s member clubs and Ulster motorsport writers.

His first international victory came on the Ulster Rally, added to a win on the Sligo Rally and third place on the Rothmans Manx International, set Fisher up as the most successful and popular rally driver in the province.

Now he is working on a deal to challenge for the Rothmans British Open Championship in 1983. He has had talks with a major works-assisted team but feels he may need substantial outside sponsorship help to take up their offer.