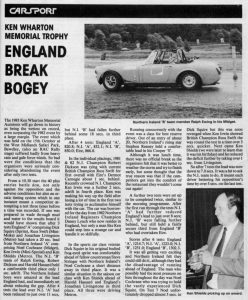 The 1983 Ken Wharton Memorial Autotests will go down in history as being the wettest on record, even surpassing the 1982 event by a large margin.  The event which was held on the 15th October at the West Midlands Safari Park, Bewdley, (also an RAC Rally stage) suffered badly from heavy rain and gale-force winds.  So bad were the conditions that the organisers were seriously considering abandoning the event after only two tests.

From a 10.30 start the 40 plus entries battle don, not only against the opposition and the adverse conditions but also an erratic timing system which in one instance meant a competitor attempting a test three times before a time was recorded.  If one was prepared to wade through mud and water to the results board it would have shown that after 3 tests England ‘A’ comprising Dick Squire (Sprite), Russ Swift (Mini- Moke) and Jonathan Livingston (Metro) had taken a 20 sec. lead from Northern Ireland ‘A’ comprising Noel Cochrane (Midget), Ken Irwin (Mini-Special) and Ken Shields (Metro).

The N.I. ‘B’ team of Ralph Ewing, Robert Dickson and Harold Hassard held a comfortable third place only 1 sec. adrift.  The Northern Ireland boys were amazed at the lead England had taken, and immediately set about reducing the gap.  After 4 tests the lead over N.I. ‘A’ had been reduced to just over 11 secs, but N.I. ‘B’ had fallen further behind some 18 secs. in third place.

In the individual placings, 1981 & 82 N.I. Champion Robert Dickson was tied with current British Champion Russ Swift fo first overall with Eire’s Dermot Carnegie just 1 sec behind. Recently crowned N. I. Champion Ken Irwin was a further 2 secs adrift in fourth place.  Ken was making his way up the ﬁeld after losing a lot of time in the first two tests trying to acclimatise himself with the car.  The car was borrowed for the day from 1982 Northern Ireland Beginners Champion Danny Lynch who now resides in England, but only a man like Ken could step into a strange car and handle it so skilfully.

In the sports car class, veteran Dick Squire in his original bodied frog-eyed sprite was comfortably ahead of fellow countryman Steve Stringer with Northern Ireland’s Noel Cochrane a short distance away in third place. It was a similar situation in the saloon car class with Ken Shields ahead of Harold Hassard and England’s Jonathan Livingstone in third place. All three were driving Metros.

Running concurrently with the event was a class for best reserve driver. Out of an entry of about 20, Northern Ireland’s rising star Stephen Reaney held a comfortable lead in his Cooper ‘S’. Although it was lunchtime, there was no official break as the organisers felt that it was better to weather the storm and try to finish early, but some thought that the true reason was that if the competitors got into the comfort of the restaurant they wouldn’t come out again!

A further two tests were set up to be completed twice, similar to the morning programme. After the first run through the tests N.I. ‘A’ had further reduced England’s lead to just over 8 secs; N.I. ‘B’ were falling further behind, but still held a fairly secure third from England ‘B’ who had overtaken Eire.

It was all getting very exciting and Northern Ireland felt they could still do it, although they had the disadvantage of running ahead of England. The man who possibly had the most pressure on him throughout the day was Noel Cochrane who was trying to hold the vastly experienced Dick Squire.  On Test 7, Noel unfortunately dropped almost 3 secs. to Dick Squire but this was soon avenged when Ken Irwin showed British Champion Russ Swift the way round the test in a time over 3 secs. quicker.  Next came Ken Shields (we were later to learn that it was his birthday) and he reduced the deficit further by taking over 1 sec. from Livingston.

So after 7 tests the lead was now down to 7.0 secs.  It was a lot to ask the N.I. team to do.  It meant each driver bettering his opposition’s time by over 3 secs. on the last test.

Everyone had their eyes on the timekeeper on the last test (just to make sure!), Noel Cochrane was first to go followed by Dick Squire, and at the end of their runs Noel showed great determination by being the quickest by 0.7 secs.  The time difference was now 6.3 secs.  It was now up to the experienced men of the Team.  Next pairing was Ken Irwin and Russ Swift.  Ken once again showed his superiority by taking 1.5 secs. off Russ.

The time difference was now 4.8 secs.  In many peoples‘ eyes it would seem very little, but in Autotest to ask a man to be almost 5 secs quicker than his closest opposition was like asking a man to try for the Land Speed Record in a pedal car!  The man who had it all to do was Ken Shields, a man who should have his name in the Guinness Book of Records for never incurring a penalty in his nine appearances at the Ken Wharton. Ken tried his hardest, and Livingston knowing his advantage, drove smoothly to drop only 2.1 secs.

England had won the 1983 Ken Wharton by 2.7 secs.  This was their first win since 1977 and it was especially pleasing for the very likeable Dick Squire who was last in the winning team away back in 1961!

Although the Team event was lost it was not all gloom as most of the silverware went to Northern Ireland. Ken Irwin pipped Robert Dickson by 0.3 secs. for first overall and first in his class.  It was very disappointing for Robert who led most of the day only to be overtaken by Ken in his attempt to lead the ‘A’ Team to victory.

British Champion Russ Swift was well behind the Northern men in third place.  Dick Squire took the sports car class from Steve Stringer with Noel Cochrane third.  The saloon class fell to Ken Shields from Northern Ireland ‘B’ driver Harold Hassard, with Livingston third.  Northern Ireland also came away with the Best Reserve award.  It went to Stephen Reaney from Armagh.  A special award was also presented to Ken Shields for his 100% clean record over the years.

It was certainly a weekend to remember. but probably more so for the weather than how the event was lost. Seventeen hours on the Liverpool boat certainly gave the teams time to discuss their strategy for the next International in March!