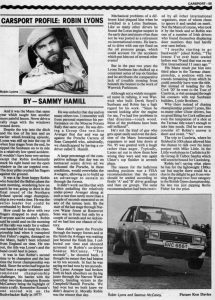 It was 10 years ago on a warm Easter Monday evening. The Circuit of Ireland was heading North again, back towards its finish in Larne. Adrian Boyd and an Englishman Jack Tordoff were battling for the lead but in Clogheen forest it was a yellow Escort which caused the biggest stir among the spectators packed around the final right-hander.

The Escort came hurtling down the hill, sliding and twisting on the gravel surface; flicked left then right and scrabbled in vain for grip on the sharply cambered corner. It was never going to make it — not without the help of a gatepost which rapped its rear end, slapping the Escort back on line.

It wasn’t just the speed of the Escort which caused the ripple among the spectators, it was its number, too…85! Yet at this stage of the rally it was running well into the top 20 and a glance at the programme revealed the name of the driver, Robin Lyons.

It meant little to me then and the next day, telephoning my rally report for the Belfast Telegraph from the crowded foyer of the Kings Arms Hotel in Larne, there was the name again in the results list, Robin Lyons 11th overall.  I called to some people sitting near the phone “Anyone know Robin Lyons?”  A little guy, pint in hand, grin on his face, said “I do – that’s me”.

The yellow Escort he used on that, his first international event is long gone now of course, but the Talbot dealer from Castlederg is still around, an established and esteemed member of the front rank of Irish rallying and the most consistent Ulster driver in the Tarmac championship this season, as well as a class winner in the Rothmans British Open Championship.

To the Tyrone “tifosi” he’s known as “Hoppy” a nickname which hardly reflects his personality and popularity but in fact it relates to a tendency in his younger days to break the odd leg or two.

His rally career has not been totally smooth either, dogged so often by mechanical failure and more than the odd accident.

And odd is an appropriate word to describe some of the strange situations his rallying has landed him in. Like the night on the Manx International a few years ago when he put his Sunbeam off the road and into a ditch. Damage was minor and he and co-driver Seamus McCanny quickly extracted the car — but there was still a problem; one of the lens from Robin’s glasses had popped out in the shunt and had disappeared in the darkness.

And it was the Manx that same year which taught him another more painful lesson. Never drive a rally stage with the windows wound down.

Despite the trip into the ditch and the loss of his lens and an earlier wheel-breaking episode, Lyons was still up into the top 10 when four stages from the end, he tipped the Sunbeam on to its side in a relatively low speed accident.

It wouldn’t have been very serious except that Robin involuntarily stuck his right hand out the open window as the car toppled over. The door pillar crushed his fingers against the ground.

It was a far from happy Robin who boarded the Belfast plane the next morning, wondering how on earth he was going to drive in the final round of the Northern Ireland special stage championship in two weeks time. He was the series leader but could be overhauled by Bertie Fisher. How could he drive with two fingers strapped to steel splints.

Everyone said he couldn’t. Robin said he could and on the morning of the rally was ready for a valiant one-handed bid to keep his championship lead when it transpired that Fisher’s engine, damaged on the Manx, hadn’t been returned from England on time. He was
out, the title was Lyons’s and the hand could heal in peace.

It was in fact Robin’s second time to be champion and the last time the forest championship was held. Since the series had begun he had been a regular contender and consistent championship challenger, his battles with the other two-time champion Ronnie
McCartney being the highlight of many a rally. Remember Ronnie’ s one second win on the Bushwhacker Rally in 1977?

He was unlucky that day, and on many others too. I remember well from personal experience his performance on the Mourne Forests Rally that same year. He was driving a Group One two-litre Avenger that day and was up against the Porsche Carrera of Sean Campbell who, admittedly, was handicapped by having a co-driver called S. Hamill.

A large percentage of the competitive mileage that day was on tarmac scenic drives and we
reckoned the Porsche, in these conditions, would overwhelm the Avengers, allowing us to build up an advantage to sustain us through the forests.

It didn’t work out like that with Robin pedalling the relatively under-power Avenger along at such a rate that rarely more than a couple of seconds separated us on any of the tarmac tests. By the start of the last stage through Narrow Water forest at Rostrevor, Sean was in front but only by a couple of seconds and we reckoned we had lost our chance of victory.

Sean didn’t spare the Porsche through the bumpy forests and at the finish the Avenger was waiting just beyond the finish line. I collected our time and shouted across to Robin’s co-driver Seamus McCanny. “Ten seconds”, he shouted back. I thought he meant they had beaten us by ten seconds. In fact he was saying we had won by ten seconds. The Lyons Avenger had broken both its back absorbers on the big jump through the Narrow Water quarry, handing victory to the Campbell/Hamill Porsche. We had won but we both knew we
didn’t deserve it. Morally Robin was the winner that day.

Mechanical problems of a different kind plagued him when he switched to a Lotus Sunbeam. Like so many other drivers he found the Lotus engine suspect in the early days and more often than not he was posted as a retirement on international events. He learned to drive with one eye fixed on the oil pressure gauge, which could account for the accidents which put him out of several other events!

But in the past two years the Lyons Sunbeam has chalked up a consistent series of top-six finishes and he attributes the comparative lack of trouble stemming from beneath the bonnet to the work of Warwick Parkinson.

Although not a widely recognised name in rallying, it was Warwick who built Derek Boyd’s
Sunbeam and Robin has high regard for his work. “Since he started looking after the engine for me, I’ve had few problems in that direction – touch wood.  Most of the problems have been self-inflicted”.

He’s not the kind of guy who gets upset easily and even the decision of the Manx International organisers to seed him down at No. 95 was greeted with a laugh rather than anger. Typically, Lyons set out to show them how wrong they were and was again Ulster’s top finisher in seventh place.

The reason for the ludicrous seeding position was a FISA recommendation that the entry should be seeded according to firstly ‘A’ and ‘B’ driver gradings and then car groups. The same recommendation had been received by all other international organisers, most of whom chose to ignore it and seeded on merit. Not the Manx of course, who took it by the book and so Robin was one of a number of Irish drivers who found themselves displaying door numbers they had hardly ever seen before.

“I must be starting to go backwards” joked Robin. “The lowest I’ve ever been seeded before was 79 and that was on my first International 11 years ago.”

His Manx result put him into third place in the Tarmac championship, a position with two
rounds remaining from which he could possibly have won the title. But instead of heading for the Cork ‘20’ he went to the Tour of Cumbria, a visit arranged through his contacts with top Sunbeam builders, Lyttle Brothers.

Why there instead of chasing championship points? Lyons, like so many other Ulster drivers, has no great liking for Cork rallies and even the temptation of a shot at the Tarmac title wasn’t enough to take him south. Did he not even consider it? Robin’s answer is short and sweet. “No”.

The trip to Cumbria, where he finished in 10th place allowed him the chance to talk over his latest project with Mike Little. In the Lyttle workshops in Carlisle is a little Group B Talbot Samba which will soon be bound for Castlederg.

Robin isn’t saying what plans he has for the lightweight l300cc car but maybe there could be a clue in the delight he got from winning the group two/four category in the British Open championship, his late run just pipping Bertie Fisher for the prize.