[The Manx Trophy Rally was first run in May 1963 as a restricted event under the auspices of Manx Automobile Club, and since 1969 the event has been run by Manx Auto-Sport.]

ROGER CLARK maintained a start to finish dominance today to become the Winner of the first-ever Manx International Trophy Rally. Navigated by Henry Liddon he won both the night and day sections of the rally in a 1600 Escort Twin Cam.

And Clark will be back next year to defend his title. He said this evening that he thought the whole of the Isle of Man was “fabulous rallying.”

First Manxmen home were John Huyton/Horace Saville — but they nearly didn’t make it. Their Ford Lotus Cortina had to be pushed into the Pare Ferme at the end of the rally after gear-box trouble in the final section at The Eairy had left the car with only top gear. They were expected to take fourth place.

Another local driver, John Dodsworth, navigated by Chris Kennaugh, made an “eleventh hour” oil change in his Escort T.C. With the rally drawing to a close, they stopped between stages for a complete change of oil and a change of tyres.

INTERNATIONAL Rally ace, Roger Clark, with navigator Henry Liddon, pulled steadily ahead during the night stages of the Rally and ended the section with a clear lead. Their Ford Escort T.C. clocked up only 409 penalties compared with 597 by Adrian Boyd and Beatty Crawford.

Manxman and former winner, John Huyton, with Horace Saville in the navigator’s seat, was close behind. however, with 680 penalties.  His Ford Lotus Cortina wasn’t very healthy on completion of this sector though, and his prospects looked grim. Right from the start things started to go wrong.

To comply with international rules he had to ﬁt a new laminated windscreen in his car, but it cracked in the process and had to stay like that. Then technical trouble under the bonnet dogged him on the night section and he ended it sounding “rough”.

Weather conditions were ideal for rallying when the 69 starters edged up to the starting ramp at the Sefton Hotel at midnight.  The Promenade was lined with several thousand spectators as the first team — last year’s winners, Chris Sclater and John Davenport (Ford Escort) — were sent on their way by the official starter, Mr. Norman Brown, president of Manx Auto Sport.

The ﬁeld had a gruelling 150 miles ahead of them.  The weather report was favourable – dry roads, with good visibility.  There was a possibility of hill fog at Snaefell, but the Round Table section was expected to be clear.  Saturday’s weather forecast was also optimistic – similar to Friday, but with the possibility of slight rain.

Competitors were warned of loose chippings on the road at Balladoole, from the second gate to the sharp left-hand bend at Poyll Vaaish Farm.

The first real incident of the rally was reported shortly before 1 a.m. from Section 2 at Ballacoar. Car No. 16; a Sunbeam Imp driven by Robin Eyre-Maunsell, with navigator Norman Henderson, crashed at Hughie’s Bridge, but they were able to continue.  The sector marshals reported that there were apparently no injuries, and the road was quickly cleared. 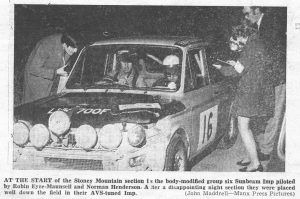 Soon afterwards, at 12 a.m., there was another accident in the same sector. Car No. 38, a Viva GT driven by Chris Coburn, with navigator Rodney Spokes, overturned.  The car was cleared from the course by a breakdown truck.

Another casualty was reported from the start of Section 3 — Ballaglass — car No. 45, Sean Campbell and John Gilleece (Newry and District Motor Club) driving a Ford Escort GT, retired.

Then shortly after 2 a.m. came news of one of the more highly-fancied local crews in serious trouble. Car No. 12, Doug Baird and Adrian Hundleby, stopped at the Lhen with what was diagnosed as a ‘holed piston‘ in their Mini Cooper S.  They later retired there.  In trouble in Section 3 was car No. 75, the Ford Escort TC of Bernard Firth and Colin Thompson (Manx Auto Sport).  They stopped at the water-splash and were forced to retire.

At 2.23 a.m. the roads open car reported from the Mountain that car No. 39, the Ford Escort Mexico of Haydn Minay and Ian Mellor (Manx Auto Sport) had sheared a bolt in the suspension.  They successfully effected repairs and continued.

With the early starters over half way through the night’s stage, reports were still coming in of drivers in trouble on the first part of the night’s “leg”.  There was a further report on car No. 75, the Ford Escort TC of Bernard Firth and Colin Thompson (Manx Auto Sport)“. It had rolled over on to its side in the river at Cornaa.  Bernard Firth was treated for slight shock, but was later pronounced none the Worse for the experience.

Then at 2.45 a.m_ came the shock news that last year’s winners, Chris Sclater and John Davenport in car No. 1. a Ford Escort RS 1600, were off the road on Stage 10, at the Brandywell road.  Both Sclater and Davenport were reported to be unhurt. Sclater was later treated for a slightly injured hand.

Drivers were being warned to look out for loose chippings on Section 14 – two-thirds of the way through the night’s drive.  Back at Section 10, car No. 20, David Smith and Chris Prentice (Furness and District M.C.), Ford Escort TC, stopped with engine trouble. They managed to effect repairs and restarted.

Car No. 16, Robin Eyre-Maunsell and Norman Henderson – who were in trouble in Section 2 at Hughie‘s Bridge – were forced out with a broken driveshaft at Glen Needles.  At 3.44 a.m., car No. 73, the Hillman Imp of Barry Tinsdale and Jock Winchip (Chess Valley MC) was reported in trouble at the Druidale “bumps”.  The Imp stopped brieﬂy, but re-started and was later reported to be proceeding at normal pace.

More news of car No. 16-the Sunbeam Imp of Robin Eyre-Maunsell and Norman Henderson. A 4.l5 a.m. report from Foxdale stated that they had got going again, but “would miss some sections.” Quite an eventful night!

First crew to finish Saturday mornings run were, Roger Clark and Henry Liddon — the unofficial leaders. Navigator Liddon reported a “pretty uneventful” run. “It went smoothly,” he said, “but it was a but unnerving to see Sclater’s car when I passed it.”  Roger’s service crew began changing tyres almost as soon as the Escort; came to rest opposite the Sefton Hotel.

Meanwhile, just along the Promenade by the War Memorial, another early arrival – the Mini Cooper S of Mervyn Johnston and Austin Frazer — was undergoing running repairs.  Volunteers were summoned to tip it quickly on to its side while the service mechanics got to grips with the “works.” 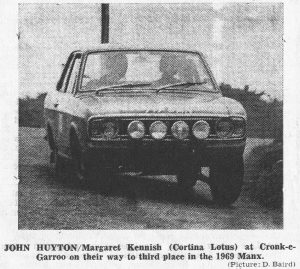 Local man John Huyton ﬁnished the night section looking grim. And for good reason: his prospects of finishing, despite doing so well in the “leaderboard” were not so hot.  He reported: “The ‘diff’ is rattling like blazes and the dynamo has packed up.”

Now came news of another retirement on the Balladoole stage. Bertie Fisher, of Enniskillen M.C., went out with gearbox trouble in his Mini Cooper, and arrangements were made for a tow.  And was this further trouble at Malew vicarage?  David Smith’s car (No. 20) was found parked in the entrance to the vicarage, near Cross Four Ways.

No. 73, Barry Tinsdale (Chess Valley M.C.) found himself out of petrol at the start of the Ballanank stage – but telephone messages to the Eairy Filling Station solved that little problem.

By now shrewd observers noted that Roger Clark and Henry Liddon in their Ford Escort were really setting a scorching standard.  On Stage 3 – Ballaglass – they went through without incurring any penalties whatsoever, and then again on Stage 5 – Snaefell – they had another clear run . . . the best record of the night.

Two other teams managed clear runs on the Ballaglass stage, however – Adrian Boyd and Beatty Crawford (Escort TC) and Andy Dawson/Nigel Raeburn in a Chrysler Imp. All tremendous achievements! 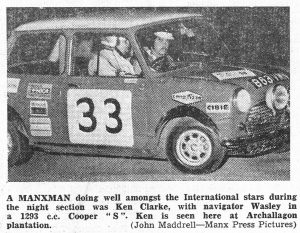 Meanwhile, now that the night sections were ending and the finishers were going into the parc ferme until 15 minutes before the start of the day sections, it was apparent that the night had taken its toll.  Of the 69 who had started, only 55 finished, ready for the remainder of the day.

After the break for breakfast, 54 cars lined up on the seafront for the start of the day section.  This was one short of ﬂhe expected number, for at the last moment No. 14, Jeff Churchill, decided to withdraw.

There were delays ahead of them at the outset because of difficulties with timekeepers and an erring English motorist who strayed onto the Druidale stage. But otherwise things went smoothly.

Roger Clark continued to progressively pull ahead. The first two sections added just 12 penalties to his total, whereas second man, Boyd, incurred 25 and Manxman John Huyton netted 57.  Boyd made up some of the leeway on the next three sections, but it was insignificant compared to Clark’s lead.  Clark incurred 22, 12 and 11 penalties respectively over the next three stages up to and including Druidale; Boyd incurred 22, 7, 10.

From behind them came news of trouble for others: No. 44, Rupert Jones, stopped in his Escort just below Tholt-y-Will – a ‘breakdown’ depriving him of finishing. Then No. 28, the “two girls”  Jill Robinson and Frances Cobb were reported off the road in their Escort 1600 on the Ronague stage.  Marshals investigated, and a 14-minute delay ensued before the car was re-started and sent on its way.

In the Brandywell section after lunch there was a moment of drama when No. 16, Robin Eyre-Maunsell spun his Sunbeam Imp at the first gate on Druidale and demolished it.  It was reported that both members of the crew were unhurt.  It was stated later that the sector marshal was to make a full written report on the crash.

The Curraghs and Ballagyr sections, number 32 and number 33 passed off without incident.  But then came a report from the sector marshal at the Ronague Hairpin that a Mini van was parked – and locked – in the road there.  Attempts were made to provide a breakdown vehicle to tow it away.  But eventually police had to break into the van to clear it from the road.  The section then started four minutes late.
It was also reported by a competitor that Mike Fisher (Lotus Cortina) had this car in a ditch at the Curraghs.  There was no danger to other drivers but all competitors were advised.

Regrettably this is all the report contained in the “Special Edition” but hopefully you enjoyed it.