Reprint of a Tyrone Courier report by Jarlath Hughes, published on 22nd September 1982.

Ken Colbert and Allister Donaldson asserted their authority on Friday night by winning the Moonraker Rally, and in the process clinching the Dungannon Motor Club Road Rally Championship.  After the first two rounds earlier in the year, Colbert and Donaldson were tying for the DMC Championship lead with current holders Trevor Haydock and Brian Quinn, so Friday nights event was to be the decider.

41 cars started from Magowan’s Filling Station at 10pm to tackle a 120 miles route in the Dungannon area.  The Moonraker was also a round of the Northern Ireland Road Rally Championship, so the current leaders of that series, John Jones and Drew Todd were out at No1.  Ken McKinstry and John McGaffin were seeded at No2, Haydock and Quinn were at No3, Kevin O’Kane and Godfrey Crawford from Omagh No4, and the eventual winners Colbert and Donaldson at No5.

It was the 2-litre Sunbeam of Kevin O’Kane and Godfrey Crawford who set the early pace on the first section in the Loughgall area.  By the first petrol halt in Moy, they had a narrow lead from Ken McKinstry and John McGaffin in the Escort, and Ken Colbert and Allister Donaldson playing a waiting game in third.

But at this point, the rally had lost two of its top seeds.  John Jones and Drew Todd had stopped with engine failure, while Trevor Haydock and Brian Quinn ended their championship hopes when they ran over maximum time after their car became bogged down on the side of the road.  In CLass2, the field was wide open with several crews on similar penalties, and Hugh King and David Sands fractional leaders.

Malcolm Reilly and Allister Burnett in their Sunbeam were leading Class3, narrowly ahead of Arthur Goan and Malcolm McQueen in their Escort.

Over the next 40 mile section towards Aughnacloy and to the second petrol halt at Cabragh, Ken Colbert and Allister Donaldson put the pressure on and moved into second place, and were challenging O’Kane / Crawford for the lead with McKinstry / Gaffin slipping back into third.  Alan Bloomer / M. Sunger had moved up to take a comfortable lead in Class2 following the retirement of Hugh King / David Sands.

The last section in the Galbally / Cappagh area saw the downfall of leaders O’Kane / Crawford when they picked up two flat tyres on one stretch of road and had to borrow the spare wheel from a spectator, losing valuable time in the process.  Colbert / Donaldson inherited the lead and held on to become the overall winners at the finish in The Inn on the Park in Dungannon.  McKinstry / McGaffin kept their Northern Ireland Championship hopes alive with a fine second place, picking up valuable championship points.

I. Hadden and J. Anderson were second in Class2, with H. Burke and R. McKee third in their 1300cc Escort.  They also won the 1300cc Class from local crew D. Ewing and P. Irwin in second.

Derek Allen, Aughnacloy, and Alan Lamont, Cabragh, did extremely well after a slow start in an RS2000 to win Class3, ahead of Malcolm Reilly and Allister Burnett in second and J. McAnerny / G. Dundee in third in another 1300cc Escort.  Fourth place in Class3 was good enough for Arthur Goan and Malcolm McQueen to win that class in the Championship for 1982.  In fifth place in Class3 was another local crew Trevor and John Bleakley in their Cooper S.

Dungannon Motor Club would like to thank all those who helped in the smooth running of the event, especially those who marshalled along the route.

Another version of the report by Jarlath was printed in the November 1982 edition of Carsport with some photographs by Harold Moffett. 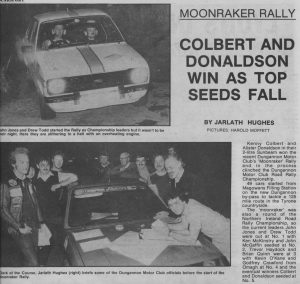 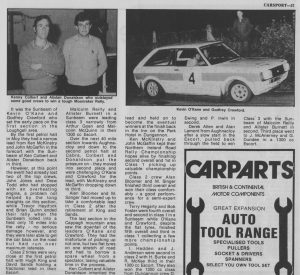