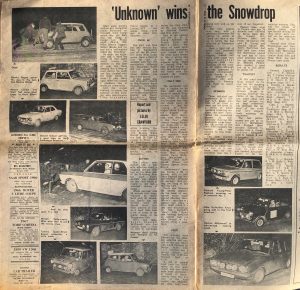 Report and Photos by ESLER CRAWFORD

Scanning of text and photos cleaned up by Derek Smyth

After some months without any navigation rallies, frustrated enthusiasts down Dungannon way got back into the swing of things last Friday night (March 6th) when Gordon Taggart, Sidney Meeke and Co. laid out a half-nighter called the “Snowdrop”.

No doubt the organisers had in mind the flower of that name which braves the weather at this time of year but there literally was a drop of snow during the night and this, coupled with the twisty whites on Sheet 5 plus three tight selectives, caused a wholesale loss of marks in every class.
And the overall winners, to create the surprise of the evening, were Semi-Experts Tony Alexander and Trevor Uncles in a Cortina G.T. – two names which were new to most rally followers.

The start was from the A45 Service Station at Tamnamore just off the M1 roundabout five miles from Dungannon. Here a field of over 60 cars assembled with very few non-starters although one illustrious name which did not appear was Cahal Curley, and Oliver Hadden was also a non-arrival.

A few people who had originally entered as Semi-Experts found themselves reclassified and Ernie Oliver/Derek Turkington, Derek Hamilton/Robert Hunter, and Trevor Haydock/George Beatty found themselves swelling this class to seven runners with Ronnie White / Harold Hagan leading the field in 7200 LZ Cooper S.  There were 16 Semi-Experts and the balance were Novices with three Army Land Rovers having a class to themselves.

The action soon started with a half mile selective along a roughish private road just on the other side of the Motorway from the start.  Thirty seconds was allowed for this dash which of course no one had a snowball’s chance of doing.
White was best with 26 seconds over bogey followed by Bert Reid with 33 seconds lost.  Reid’s Imp was terribly noisy and should never have been allowed to start as it must have done a lot of harm to the public image of the Dungannon Motor Club.
Next best Semi-Expert Alastair McConnell who had craftily done a recce on foot by torchlight before the rally started!  He was followed by Malcolm Pedlow and Ken Irwin.

Best of the novices was one R. St. J. Young followed by Wilson Hyde and Mervyn Kelly.  The antics of some over-enthusiastic spectators here caused one of the army Land Rovers to take a wrong slot but the threat of someone being “ﬁlled in” issuing from the rear of the vehicle in very determined Cockney tones soon dispersed the troublemakers in haste.

The navigators now had a chance to do their stuff and two hours of mainly Tulip sections in the south-east corner of sheet five ensured that only one clean sheet remained – that belonging to White/Hagan.  Oliver/Turkington dropped one minute, Terry Harryman was down two in the “Snu“ while veteran George Beatty was doing well in the Trevor Haydock car.

Among the “semis” several names cropped up regularly with good times with Alexander/Uncles followed by Jimmy Conlon/Peter Scott, Pedlow/Harkness and McConnell/Cheevers.  The leading Novices were Wilson Hyde/Lenny Weir, David Gibson/Derek Smyth, John McCallister/C. Waddell, John Kyle/Gerald Wilson and Tommy Speers/Brian Rowan.
“Motorweek’s” man was having a bit of trouble with a sick Peter Raphael but was nevertheless pressing on strongly, and getting the hang of this rallying lark.
There now followed the second selective on the maze of very narrow twisty roads around Glenbeg.  Here White’s run came to a sudden end when a drive shaft called it a day and with him out it was anybody’s
“race” with Oliver now looking favourite as nobody had yet even thought of Alexander being a possibility.

Ten minutes were allowed for the Glenbeg selective and nearest to this was Oliver with 14.45 followed by
Novice Hyde with 11.17.  Conlon was a second slower, Joe Donnelly was 11.22 and Norman Reid on 11.25.
A lot of people must have lost themselves on this un-arrowed test and there were some astronomical losses of marks. Among those who lost time at the next control was McCallister who had been going very well up until then.
The next section was easy with a generous allowance for taking on petrol at Cabragh and then it was on to tackle the last selective at Parkanaur Estate.
Here a light fall of snow had rendered the tarmac very slippery indeed and there were some very queer nocturnal goings-on with cars shooting off the track at all angles although no one appeared to become irretrievably stuck thanks to the vast numbers of spectators who were braving a freezing cold night to watch the fun.

These included one gentleman in a Corsair G.T. Estate who first of all tried to wear out his tyres by a series of wheel spinning reversing sessions and then entertained the assembled masses by continuously ﬂashing his headlights while awaiting the arrival of the cars.  Unfortunately, his battery did not succumb to this treatment!
The time allowed for this section was again very optimistic (or pessimistic, depending on which “way you look at it) and there was no one anywhere near the 1min 15 sec. required.

Fastest time went to Conlon who was 78 seconds over followed by Bert Reid (80), Joe Donelly (82), Norman Reid and Paddy McGauran (85) and R. Young and David Gibson (86).
Terry Harryman had foul luck here when the distributor played up and had to have some attention before the car would continue.  Malcolm Pedlow also spoiled a good run up to this point by going off the road.

At this point, everything seemed to be over bar the shouting with only a half hour run to the finish at Altmore House remaining.  However, the Clerks of the Course had other ideas and this last section via six map references was probably the tightest of the event with very slippery roads assisting the organisers.
The best performance was put up by Novice McCallister who dropped three minutes followed by Conlon with 4, Oliver, Pedlow, Alexander with 5, Gibson 8 and O’Loughlin 11.
The first car reached the finish shortly after 1.00a.m, the results were ready by 3.00 a.m. and showed Alexander / Uncles to be the surprise winners. This was the result of steady rather than spectacular driving for they never were fastest on the selectives or the best on the road.
Second were Oliver/Turkington and Donnelly/Meeke were third with McConnell/Cheevers fourth, Conlon/Scott fifth and Hyde/Weir, the best Novice crew, sixth.