Article reproduced from Wheel Magazine – 14 May 1966.  Words and photo by Esler Crawford. 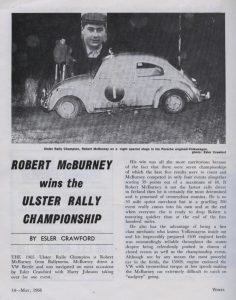 THE 1965 Ulster Rally Champion is Robert McBurney from Ballymena. McBurney was driving a VW Beetle and was navigated on most occasions by Esler Crawford, with Harry Johnston taking over for one event.

His win was all the more meritorious because of the fact that there were seven championship events of which the best five results were to count and McBurney competed in only four events altogether, scoring 39 points out of a maximum possible of 44.  If Robert McBurney is not the fastest rally driver in Ireland then he is certainly the most determined and is possessed of tremendous stamina.  He is no 50-mile sprint merchant but in a gruelling 300 miles event really comes into his own and at the end, when everyone else is ready to drop, Robert is motoring quicker than at the end of the first hundred miles.

He also has the advantage of being a first-class mechanic who knows Volkswagens inside out, and his impeccably prepared 1500 engined beetle was outstandingly reliable throughout the season despite being relentlessly pushed in dozens of closed events as well as the championship events. Although not by any means the most powerful car in the fields, the 1500s engine endowed the VW with tremendous torque at low speeds making the McBurney car extremely difficult to catch on “nadgery” going.

Second in the championship was Michael Ford-Hutchinson from Lame who, navigated by Ken Atkinson, scored 36 points out of six events in his 1275 Cooper S. This was a fine effort by a young driver who has still to complete his University studies and who has not as much time and money to devote to rallying as the average person. Third were Robin Steenson and Ian Turkington from Cookstown driving at various times a Cortina G.T. and 1275S (belonging to a very trusting girlfriend). Robin appears to be one of the more temperamental drivers for on some events he went brilliantly and in others miserably and finally ended up a mere half point behind Ford-Hutchinson after competing in five events.

Norman Thompson and Norman Henderson were very hard triers in their ex-works Imp but lack of c.c.s always kept them from finishing at the very top in any of the events and they eventually finished with 33 points from six events. Ronnie White, assisted mostly by his sister Doris in a very potent 1275S, started off well but tailed off towards the end of the season and finished the year with 30 points, also from six events.

In sixth place, and the first Southern driver in the Championship, was Dubliner Noel Smith who drove a “bit” of Cooper S and was navigated by Ricky Foote. Noel is one of the most popular people about and everyone was well pleased to see him finish well up in the toughest and last event of the year, and amass 24 points from only four events.

Although having to make the rather daunting journey from Cork to compete in Northern events, Ricky Foote had shown himself to be one of the top navigators in the country even when competing in “foreign” territory. 1964 winner Ronnie McCartney had one mechanical failure after another in his potent Renault R8 Gordini and could only finish 10th with 15 points from five events.

Taking the events in chronological order, the first qualifier was the Mid-Antrim Northern Lights which was organised by Robert McBurney. The previous year’s Restricted event run by this club had been well and truly “slagged” by the local correspondents as it was an extremely inept affair consisting of finding the names of a lot of schools on a busy Saturday afternoon. The Club reacted to this criticism in the proper spirit and made a genuine attempt to put on an event of the “approved” type.

As it turned out the route was just a little bit too easy in a territory which suffers from a dearth of good whites and eight crews, including Vic Elford and David Stone who were over on a Circuit recce, were clean on navigation so that the tie-deciding driving test had to be resorted to. In this, Ronnie White was fastest giving him the top place followed by Norman Lynas, making one of his rare appearances in a 1500s VW, and Robin Steenson.

After this February event, a long break ensued before the next event in June and it is good to see that the Northern Ireland Association of Car Clubs is going to make an effort to get the events better spaced throughout the year, rather than have them all taking place during the months of November and December. This next event was the Newry M.C.’s Circuit of Down which could have been a fine event and was certainly a great improvement on previous efforts, but it suffered from a lack of organisation which led to the last third of the route being scrubbed.

It is unfortunate that the bulk of the work at Newry falls on the shoulders of those two great enthusiasts Stephen Gibbins and Colm Magennis. Local man Eric Baird navigated in his Ford Anglia by Brian Rickerby was the winner probably as a result of a decisive section around Deadman’s Hill which was run in dense fog, while up and coming man Dessie McCartney (brother of Ronnie) was second in his S/C Sprite navigated by Esler Crawford.

The famous, but no longer “with it”, Knock All Night followed in mid-June. This was merely a night-time driving test meeting and although as such is enjoyable it has no place in a “RALLY” championship and its only effect on the championship was to give the driving test experts a chance to amass some points. The new regulations laid down by the ANICC now ensure that in future, such events will not qualify for championship status and the Knock Club have gone off in a huff, taking the attitude that every-one is out of step except “our johnny” and say that they will run no more car events. Maybe motorcycle events are better money-spinners?

The Scallon Cup at the end of September saw a return to the real hard tough type of rally and the Omagh Club put on a splendid show with Harry Johnson at the helm. Favoured by probably the best territory for rallying in Ireland. their 190-mile route was conﬁned to a radius within 25 miles of the town and included half a dozen forest special stages. This event saw Robert McBurney entering the fray and his campaign got off to a good start with a win from the redoubtable Mervyn Johnston who was partnered by Ivan Allen with Robin Steenson collecting third place. At this stage, the lead in the championship was held by Ronnie White with Dessie McCartney and Norman Thompson tying for second.

The Dungannon Night Rally was another fine event consisting of navigation only in the South Tyrone and North Armagh region. At the wheel of a Cooper S, Robin Steenson was in great form on this occasion and managed the almost unheard-of feat of passing Robert McBurney on the road to win with a loss of just 17 minutes to the latter’s 23 minutes, while Noel Smith collected some useful points by taking third place. Unfortunately there were one or two instances of inconsiderate driving in this event which caused the club more than a little trouble in various directions but happily, everything was amicably straightened out.

With 83 starters the Ulster Automobile Club attracted the largest entry of the season for their Night Owls rally. Apart from one or two small points this was an excellent event in the “classic” style with a multitude of controls separated by short sections and with navigational ability at a premium. Making a comeback to rallying Frank Robinson, navigated by Terry (“Mr. Navigation”) Harryman, came through to a fine win followed by Ronnie McCartney/Mike Hart who at last finished an event, even though they had to resort to a Cooper S to do so while Robert McBurney, although suffering from mal-de-navigateur, further made his presence felt in the championship by taking third.

Through no fault of the UAC but because of the cussedness of several people who were not even locals there was some trouble in the Armagh area where the rally took place and this culminated in the recent wise decision of the ANICC not to hold any more rallies in this region for two years.

The next and penultimate event was to have been the Queen’s University Winter Rally, but unfortunately the weather was just too wintry, and with snowdrifts blocking half the route the event had to be postponed until the following January and it was eventually decided to include it in the l966 Championship. With only the Starlight left then, this left a most interesting situation for only 2 points separated the first five drivers, with Norman Thompson having 30, Robin Steenson, 30.5, McBurney 30, and Michael Ford-Hutchinson and Ronnie White both on 29.

There was everything to play for with any of these five capable of winning. During the two years it was under the “Clerkship” of Terry Harryman, the Larne Starlight had built up the reputation for being the “Rally of the Year” and the new team of organisers under the leadership of Frank Robinson was determined to keep up this name. The event was slightly changed to make it even more of a driver’s rally by making the sections longer and the navigation relatively simple as is the modern and logical trend. In addition, there were eight long special stages.

As it turned out, Robert McBurney made sure of the championship by finishing third while his nearest rivals fell by the wayside. However, without any disrespect to the winners Adrian Boyd/Beatty Crawford, McBurney was the moral victor for he simply decimated the ﬁeld on the road section and was second-best on the stages only to throw the honours away by the technical error of clocking in early at a passage control. Nevertheless, Boyd was making a return to rallying in a serious competitive car — a Marcos engined Anglia — and went well making fastest time on the stages, which he much prefers to road work and was very gratified to have even finished the rally in a completely untried car.  A popular second place was taken by Noel Smith.

As a whole this past year’s Rally Championship was of a higher standard than the preceding year in every respect and the current year should see an even better series even though the number of events has tended to go down. The ones that no longer exist were mostly the deadwood and would either have died a natural death or would have been excluded by the new set of regulations laid down by the ANICC.

It is a pity, however, that the North of Ireland Club’s Circuit of Ulster should have lapsed but the newly revived Enniskillen Club has shown itself capable of running an event of the very highest standard and their new restricted rally should be a good one.  In any event, it is better that the Championship should consist of a small number of really top-class events rather than a large number of mediocre ones.  Increased interest will be added by the recent introduction of a Navigators‘ Championship, while the driving test boys will be catered for with a Driving Test Championship of their own.