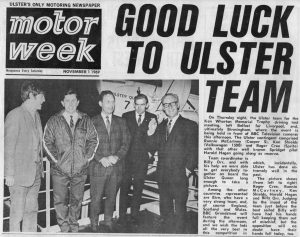 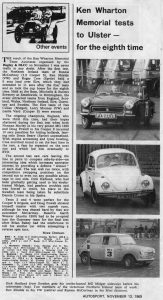 Ken Wharton Memorial tests to Ulster – for the eighth time

THE result of the Ken Wharton Memorial Team Autotests organised by the Hagley & District Light Car Club on November 1 was never really in any doubt.  After the first test, the Northern Ireland team of Ronnie McCartney (1.3 Cooper S), Ken Shields (VW) and Roger Cree (Sprite) held a 5 secs lead over Eire, which they had extended to 11 secs after the four tests and so took the cup home for the eighth time.

The reigning champions, England, who were third this time, had their hopes shattered during the first test when both Norman Morley in his very potent MG 1300 and Doug Powell in his Cooper S incurred 10 secs penalties for hitting bollards, leaving only Denis Beare (Sprite) unpenalised.  With engine screaming and tyres howling, Cree scorched round to set the best time in the test, a feat he repeated on the next one and which led him eventually to Best Time of the Day (BTD).

The second test saw cars leaving the line in pairs to compete side-by-side, an interesting idea which increases spectator interest by providing a deﬁnite “ winner” of each duel.  The test was run twice, with competitors swapping positions on the second run to even out any possible advantage to one side.

Dick Hedlund, who had been gradually getting used to his works-loaned Midget, had gearbox troubles and was forced to retire, his place in the Swedish team being taken by substitute Dennis Crome in his Sprite.

Tests 3 and 4 were perfect for the Cooper S brigade, and Doug Powell showed himself master with two superb runs, although he was chased hard by that ace autotester McCartney.  Reserve Garth Weaver (Austin 1300) had to be co-opted into the Guernsey team for the final test after Brian Rabey had the misfortune to roll his similar car while attempting a reverse spin turn.