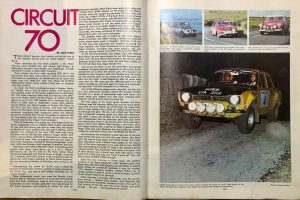 “THOU SHALT journey unto Ireland and tell the tale of the Gallaher Circuit unto our noble readers,” sayeth Richard Hudson-Evans (Editor).

There remained but one small problem — the Foden chariots were booked into rest homes over Easter, so alternative transport was sought, and indeed got, through Standard-Triumph, in down-town Coventry.

Once aboard the ferry, with resulting GT6 Mk 11, we discovered that there was a six-hour wait in order to load containers or something, so refreshment of all types was taken with Eric Wilkinson, who was taking his ex-Barry Williams/Pat Moss works Lancia Fulvia over to compete with Don Griffiths.

Pride of place went to a works car, with Roger Clark/Jim Porter appearing with an 1800cc BDA engine, five-speed ZF box and coil-sprung rear end to make their left hooker ex-Monte car even quicker than last year’s offering, which seemed the ultimate at the time. This team was being watched over by Bill Barnett, aided by Ginger Devlin, with engine genius Peter Ashcroft in attendance to watch over his particular baby. Also, in support were two van loads of tyres from Goodyear, crewed by Messrs Moggridge, Prize-man, Hillis and Everson, with Engineer Chatterton advising.

Backing-up the official Boreham effort, and getting some service from them, were Barry Lee in a Gp 2 1800cc leaf-sprung car, as he used on the RAC, Adrian Boyd (Westway prepared) and Charlie Gunn in locally produced Gp 2 versions, and Chris Sclater in his ex-Mikkola Austrian Alpine car, with an engine prepared by David Wood Engineering, but entered by Withers of Winsford, also running in Gp 2.

Representing the works for BLMC was a Maxi for Rosemary Smith/Alice Watson, putting in some practice for the World Cup, and also a very strong challenge for the Ladies’ Award.

Other exceedingly smart cars were the Bostick (Little Tommy Mk IV) Wolseley Hornet of locals Noel Smith/Ricky Foott. The Cork ‘Goldstripe’ team of three Escorts, all most resplendent in their metallic gold with much advertising for the Indus sponsors, well known in Ireland for their oil dispersant services. Mark Ridout was really up to date with ‘Yardley—Team BRM’ stickers on his bright orange Escort.  Another team that caught the eye were the three blue and white Gp 2 BMW 2002s of the Auto-Extra equipe entered for Roy Fidler/Barry Hughes, John Bloxham/Richard Harper, and Toby Sheppard/John Taylor. On appearance alone, they looked good enough to win the team prize. Phil Cooper appeared with his ex-Paddy Hopkirk Tour de France Mini, now running on 10in wheels instead of the delectable 12in knock-offs, and being partnered by Chris Nash on only his second Rally after two year’s retirement.

The Swedes were well in evidence with their riotous sense of humour, one BMW having a sticker that told the world ‘steam boiler made in Sweden’.  And last of all, the car that was best presented and certainly attracting the most attention: the Triple C/Uniroyal car of Will Sparrow/Nigel Raeburn. Complete with more stickers than any other car, and (we hoped) more BHP than any other Mini.

At the morning breakfast halt, Roger Clark was leading from Barry Lee and (a great delight for us) Will Sparrow was ninth, only 1.8 secs behind Noel Smith in the Hornet.  John Bloxham should have been third, but fuel feed trouble on the 23-mile Sally Gap stage delayed him.

Just as we sat down to our evil (and rather over-priced) breakfast, the great Sparrow appeared on the scene.  As he started the car to leave the service park, the ring-gear decided to part company with the flywheel and the whole lot jammed solid, so our hopes for the Rally were out after the first night.  A sad happening after so much hard work and toil.  Will soon got the offending parts out and electric-welded up, and then spent his time as a disconsolate spectator.  The Rally thrashed on to Killarney.

Two of the following stages were cancelled, the first due to a very unfortunate accident where Phil Cooper totalled his Mini in a series of spectacular rolls, both driver and navvy being only slightly hurt and soon released from the hospital, and the second due to a wood fire!

The first stage of the much loved ‘Sunday run’ from Killarney was the infamous Molls Gap and the same corner saw both Lee and Sclater go off through the same hole. only to drop straight into a field, do a quick Autocross and out through the gate. The day was a hard one. Roy Fidler had a prop shaft coupling break just after Don Abrahams had done a great job welding up his engine mountings: John Heppenstall had his alternator seize and Bob Bean lost second gear.  Back in the service park, there was again great activity with Adrian Boyd having a new front strut fitted, and “Heppy” working like a beaver on Bean’s gearbox.  Both Roger Clark and John Bloxham had their exhaust systems welded up, and Mark Ridout even WASHED his Escort!

We arrived at the Enniskillen supper next day to discover Noel Smith had gone out with idler gear failure, Bob Bean with the loss of more gears and Cathal Curley, the Ulster Rally Champion, with a blown head gasket on his Escort.  One of the most impressive runs was that of Ken Shields who was leading the small GT class in his standard Sprite without a clutch!  The Auto-Extra team were a bit glum; one of their service cars, a brand new Audi, had taken a long jump into a field and was very much a write-off.  They still had a brace of BMW 2500s though!

Early the next morning in Ulster again, the saddest incident of the Rally happened, when second-place man Barry Lee, with only three stages to go and safely in second place, broke his crankshaft (perhaps it was his number – 13?).  Another unhappy incident robbed Paddy Fay of certain victory in Class 3 when a band of happy revellers hit his Gordini head-on in Donegal.  Clark, enjoying a hat-trick with Porter, was the winner from tarmac-proven Chris Sclater.  John Bloxham had fought back from his earlier troubles to finish a fine sixth, so the final activity of the day was the usual ‘hooley’ and prize-givings — Oh, yes — and hangovers all round!