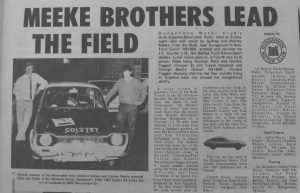 Dungannon Motor Club’s Auto-Supplies Moonraker Rally, held on Friday night, was won easily by Sydney and Stanley Meeke from the Bush, near Dungannon in their Ford Escort RS1600, entered and serviced by J.E. Coulter Ltd., the Belfast Ford Rallye Sport dealers.  Other Local crews also came in fourth and sixth places, these being Norman Reid and Gordon Taggart (Cooper S) and Trevor Haydock and George Beatty (Escort RS1600), Gordon Taggart showing that his last few months living in England have not cost him any of his navigational ability.

A large crowd of spectators were at the Bush X-roads to see the cars leave the start.  On the first section, from the Bush to near Tamnamore, the Meeke’s were ‘at home’ and were much faster than the second crew, Ronnie McCartney/Norman Henderson in a Triumph 2.5 PI who were destined to retire soon after with a damaged gearbox.  Also destined to retire were Pat M‘Court/Peter Scott and Jim Conlon/Ian McFarland, both in Escort Twin Cam’s.

The Meeke Escort was never out of the lead for the rest of the night.  Such fancied crews as Mervyn Johnston/Paul Phelan and Ronnie White/Harold Hagan (Cooper S types) missed controls along the route, as did Dessie McCartney and Terry Harryman in an Escort T.C.  Ernie Oliver from Coalisland, navigated by Ken Atkinson, in has new Escort RS1600 was lying second until his retirement near the finish.

In the semi-experts class Peter Little and John White won easily, and in fact brought their Cooper S into fifth place overall.  Class three, the touring class, went to Snowdon Corkey and Tom Wilson in a Saab V4 and were it not for a few minor differences in the timing of this class compared with the other two, would have finished second overall.