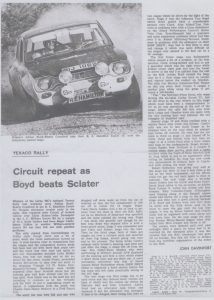 Winners of the Lame MC’s National Texaco Rally last weekend were Adrian Boyd and Beatty Crawford in the R. E. Hamilton Escort TC. Despite alternator trouble early in the night, they repeated their Circuit of Ireland victory over Chris Sclater and John Davenport in the J. C. Withers Escort RS by a margin of 19 seconds. Early leaders had been Roger Clark and Henry Liddon in another Withers-entered Escort RS but they fell out with gearbox problems.

The rally started from Carrickfergus on Friday night though there was a bit of panic when the route instructions turned up late. It soon became clear to competitors that the stages and the compulsory service areas had been laid out with more than usual care and the route was very easy and quick to plot out. Non-starters included Colin Malkin whose Imp was not ready and so his co-driver for this event, Austin Fraser, persuaded Ronnie McCartney to take over the entry in his shopping Triumph 25 PI. Robin Eyre-Maunsell and Norman Henderson were hardly expected after their Scottish shunt but the running gear had been slotted into his old Imp shell. Noel Smith was at the start but not intending to compete as he has virtually sold his ADO 15 and is negotiating round an Escort. A replacement from the South was Charlie Gunn and Larry McEvoy in a Ford Escort TC.

The entry list was very full and any who dropped out were made up from the list of reserves so that the full complement of 100 set off to tackle the 19 stages. Roger Clark and Henry Liddon took a bit of time to get away from the start in their old RAC Rally car as no direction of departure was specified, and the ramp pointed the wrong way.  Stage 1 was short and gravelly and though he set the best time, Boyd was stopped after it with a loose petrol union.  Stage 2 was uneventful and saw Clark and Sclater surge into the lead.

Then on the third stage, both of them got caught out over a colossal Jump and removed all their fog lamps, almost going end over end in the process. The bump broke Clark’s exhaust while Sclater’s steering rack bent and just after the stage, a wheel fell off from the rear. Roy Fidler and Barry Hughes, who were performing in Withers’ ancient AVX, displaced all the steering and bent a strut which seized a short while later and put them out. A more permanent retirement was that of David Agnew and Ralph Packenham whose BMW 2002TI failed to negotiate a bend shortly before the big jump and left them practically sitting in the roll cage.

The next stage was Orra Lodge, due to be used twice and this claimed many victims, not least of which was the course car driven by Malcolm Neil and Esler Crawford. Adrian Boyd had an alternator lead break and although he replaced the lead, the alternator was damaged and it too had to be changed later losing him time on two stages where he drove by the light of the moon.

Stage 5 was the infamous Torr Head where Boyd pulled back a considerable amount over Clark. Alan Allard/Tom Fisk were in problems here with a loose distributor on the Allard Performance Centre’s blown Twin Cam. Robin Eyre-Maunsell had a puncture and some suspension problems which lost him over 5 minutes. Robert McBurney and Norman Smith were in problems with the alternator on their BMW 2002TI; they had to find time to stop and change it which was quite difficult as the stages only opened to the first car on a 30MPH average.

The first forest stage was Ballypatrick which caused a bit of a problem. At the first junction, Clark wrong-slotted and had to ask a spectator which was the right route while Sclater swept right past and into the forest to arrive at the end 3 minutes quicker than the rest of the ﬁeld. Adrian Boyd missed the bogey time by 6 seconds. Next stage was back on tarmac and started below the viaduct on Glendun.  The rally lost Mervyn Johnstone and Paul Phelan on this one when their Cooper S caught a marker post while using the grass to get around a left-hander.

“Flat” Pat McCourt and Peter Scott, who were driving the ex-Cahal Curley Escort TC, lost all the drive to the rear wheels on this stage, which must have been a disappointment to Cahal Curley as he was spectating at the end of this stage. Before the rally left this area, both Orra Lodge and Glendun were run again with the cars picking their way between the red triangles of departed cars.

Special stage 10 saw Boyd credited with a minute faster than Clark and Sclater. Clark’s rally was not to last much longer as he dropped time on the road when an exhaust pipe broke off entirely. He then had the car stick in third gear on stage 11 and limped off to retire. Boyd and Sclater both lost time on stage 11 at a tricky bend after a brow where they took to the undergrowth. Stuart Brown and Stuart Parker from Scotland in a Cooper S retired when their service crew had a nasty accident while the Capri of Brian Mitchell and Bob de Jong failed to put in an appearance after rolling on Glendun. De Jong has now made two appearances in Ireland, both in Capris. and both ending the same way.

Robert McBurney was going very well at this stage but after 13 lost a bolt from a tie rod on the front suspension. All his efforts could not get the rod back again in time to continue. The next stage was a 2O-miler where Sclater lost his clutch and Brian Boyd/Derek Boyd rolled in the ex-works, ex-Adrian Boyd Cooper S, losing the screen and four minutes. Billy Coleman and Frank O’Donoghue were limping along in the Renault Alpine which had blown out a plug on the previous stage and they lost a good placing because of it. Boyd and Sclater were now very close on times and the Irish driver used all he knew to open the gap over the last four stages. It was on Slieve Gallion that Charlie Gunn had an argument with some sheep and lost some time. On the next stage, the rally lost Ronnie White and Harold Hagan when they rolled their Mini Cooper and wrote it off.

The results were delayed until well past midnight after a query on times had to be resolved by the Stewards alter it was discovered that the RAC timekeeper had gone off on holiday. But this did little to detract from the excellent organisation of the event.