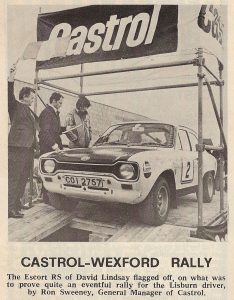 The Aer Lingus/Castrol Wexford Stages Rally, has fast become one of the major rallies of the year. The entry, at 109, was good, and the 96 of these who started were whittled down to 49 at the finish. For the first time, this was a two-day event, with scrutiny on Saturday morning, and the actual start at 3 p.m. from Wexford town. 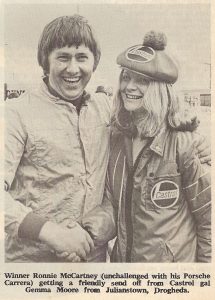 Five stages were to be tackled on the first afternoon, but one of these was cancelled due to a marshalling problem. Ronnie McCartney, out for blood again in the Porsche, established a small but useful lead over a phalanx of Escorts which included both of the Lindsays, David and Nicky, Sean Campbell, with BMW intervention from Robert Ward. At the end of the day, the order was Ronnie McCartney, Sean Campbell, David Lindsay, Nicky Lindsay, Robert Ward, Noel Smith, with John Bridges getting the hang of front wheel drive again, heading the Mini brigade in seventh place.

Twelve stages were held on the second day, and these provided plenty of carnage, both mechanical and otherwise. The three best placed Escorts all fell by the wayside, David Lindsay being first to bite the dust when he had an off on the day’s second stage. He damaged the front suspension and bodywork, losing almost 4 minutes in all. On the following section, Campbell vanished into the undergrowth, without damage, while shortly afterwards, Nicky rolled his Escort when the steering column became detached from the rack. 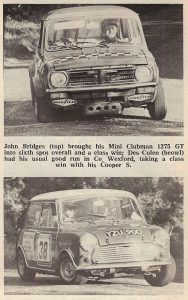 This little lot promoted Ward to second place, with Smith third, having pulled away from Bridges despite braking trouble. Gerry Forde had now climbed up the leader-board and was pressing Smith hard, but the latter just held off the challenge, finishing all of 2 seconds ahead at the end. Meanwhile, David Lindsay was flying low, trying to make up for his earlier indiscretion, and by setting most of the day’s best times, managed to get 5 seconds ahead of Smith. However, he had road penalties which dropped him back to fifth.

Best of the Group One brigade was Jimmy Stewart’s ex-Hill, ex-Boyd Capri 3 litre, which continued on to finish ninth overall despite an argument with a bank on the first stage, and minus its exhaust for most of Sunday. 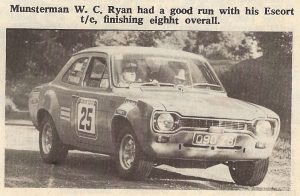