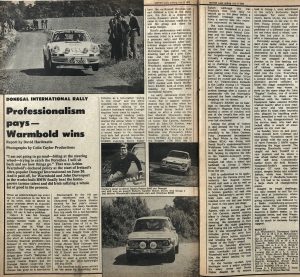 “I am not going to go mad – biting at the steering wheel – trying to catch the Porsches.  I will sit back and see how things go”.   That was Achim Warmbold’s declared policy at the start of Ireland’s ultra-popular Donegal International on June 20. And it paid off, for Warmbold and John Davenport in the works-built BMW, finally beat the home-grown tarmac talent and did Irish rallying a whole lot of good in the process.

When an acknowledged top event has 10 nonstarters in the first 30 of its entry, fails to attract as many overseas crews as expected and still hopes to increase its status in the European Championship, I’d say it had a problem.

Unless it was the Donegal International Rally, run over closed public tarmac roads in Eire’s North-West corner the other weekend, that is. What the event’s promoters and sponsors should note instead is the number of visiting crews who did make the start at Letterkenny despite crushing financial problems — just because of the rally’s consistent quality and unique, ultra-strong appeal. This was reflected last Wednesday when a panel of judges gave Ford’s “Rallyman of the Month” award to clerk-of-the-course Austin Frazer and the Donegal Motor Club – the first time the Colibri Trophy and £50 cheque has gone to a non-driver.

Discouraged by the 100 per cent retirement rate of the Chequered Flag Lancia Stratos entered for last year’s winner Cahal Curley, the many hundreds of spectators looked to the next four top seeds for a red-hot battle and were not disappointed.

The deceptively quick Dessie McCartney had his usual second-hand Porsche Carrera (one of 14 in the entry!) which has had only four dampers and two discs replaced since it was bought from AFN 2500 rally miles ago. Adrian Boyd sat in front of a Dieppe-built 1800 engine in the Hurst Group Alpine; Billy Coleman was looking happy and relaxed with Peter Scott in the Thomas Motors MkII Escort and German privateer Achim Warmbold seemed ready to start a gentle touring holiday in the ultra-lightweight 260 bhp BMW.

The excellent rally press service set the scene by describing Amy Johnson as a non-starter “owing to low cloud” and the entry trundled out to start three days of pace note rallying in the summer heatwave which Donegal regulars have come to expect.

A right-hand bending yump-back bridge on the first stage started the action when it leapt out in front of Curley’s Stratos and tried to remove a wheel. The car retired later in the day after a sound repair to the damaged stub axle had proved impossible. Farther down the ﬁeld, Group 1 exponent Bertie Fisher bent the ex-Russell Brookes car and deflated a tyre at the same spot, the first in a chapter of mobile disasters which he overcame in true Brookes tradition to win his group and class by a large margin.

Boyd’s performance was noticeably down with a non-functioning intercom (vital in a noisy car on a pace note rally) and 6500 rpm limit being mentioned. After half-a-dozen stages on which several backmarkers went off or broke, McCartney had pulled out an amazing lead of 44 seconds over Coleman and the rapid English privateer Brian Evans in his Stuttgart prepared Carrera. Warmbold, making a steady start as he had planned, was content to hang around over a minute behind, getting used to the roads; in contrast to the Group 1 brigade, where Victor Armstrong’s BMW duelled with Derek McMahon’s RS2000, both of them sadly heading for retirement with mechanical failures.

An early retirement from the Porsche class was Marek Gierowski, but in happier circumstances than last year when his car went up in flames. This time, the Polish driver landed with brakes on after a yump on the fast Muckish Mountains stage and smashed the low, racing-spec oil cooler.  The Carrera, formerly raced by John De Stefano, was promptly sold to McCartney.

Justifying his choice as a Ford Rallyman was Plymouth’s Chris Wathen, giving Irish co-driver Chris McNally an exciting ride in the Vespers’ 1700 BDA Mk II Escort. Although this was Wathen’s first Irish rally he battled up to 5th place before a halfshaft breakage spun him down a narrow lane into expensive retirement on Saturday.

The hard-worked second day started with Warmbold in a comfortable 3rd place behind Coleman and the leading McCartney, both of whom were worried by tyre shortages. Dessie had so much in hand, though, that he could afford a spin and recovery on the first test without any appreciable loss. The standard car brigade — rightly treated as virtually a separate entity – had local star P. J. Wilhaire moving up to challenge Fisher despite a misﬂre, while Adlards performance parts man Henry Inurrieta was pulling away from the Magpie/C. D. Bramall Capri 3-litre crewed by myself and Dave West, and Ari Vatanen/Dave Richards in the Lobbs Ascona 1.9. “Finnish Ari” finally retired the car with modest damage after a number of spectacular offs but thoroughly enjoyed the fresh challenge of a shopping car on tarmac.

Wilhaire’s RS2000 ran its bearings on Saturday afternoon; Ray Murphy’s Magnum from Galway started a series of troubles with one of the event’s few rolls and Inurietta’s hard-worked car fell over but continued. 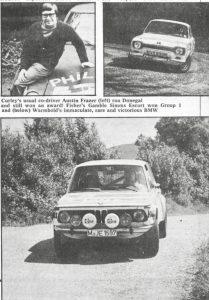 Among the group of visitors in and around the top l0, Jack Tordoff was motoring along smoothly in his 3-litre Carrera; Tony Drummond (accompanied by Paul White in the Carman/Albany BDA) was dicing with Derek Boyd’s unsponsored Escort; Welshman John Price was there in his new Porsche and George Hill, hoping to improve his lead in the Castrol/Autosport series, dropped out on Donegal’s steepest hill when a wheel and half-shaft on Group 2 Martin Group Vauxhall parted company from the car.

Hill is understood to be applying to join the Carrera crowd and certainly few English drivers would suit such a car as well as the quick Oldham timber man. No cars are perfect, however, and a broken gearbox oil seal was causing McCartney’s service crew both time and pain as they reached over red hot rear brakes to pour in two pints of oil per stage.

Rapid top 10 man David Agnew, with no second gear left in his Carrera, started making plans to change the gearbox straight out of parc ferme on Sunday morning. His mechanics, in fact, spent half the night practising and timing the job with the result that it was accomplished in 26 minutes, giving the crew four minutes grace before exclusion and winning the mechanics the “Spirit of the Rally” award.

Late on Saturday afternoon, McCartney’s troubles had taken their inevitable toll and both Warmbold and Coleman overtook him, the latter by just two seconds!

By the Sunday re-start, tyre shortages were a major problem for many crews and Bertie Fisher, despite his 3½ minute lead in Group One, even advertised in the Ballyraine Bugle newspaper for more Dunlop racers. Kevin Glynn, the London-based Irishman on his way to the Best Young Driver award in a troublesome RS2000, had rubber problems of a different type when his car twice shed a wheel, costing him 2nd place in Group One after a tremendous drive.

Perversely enough, it was standard Avon radial rubber (and a few quick fear-driven reactions) which saved my own Capri from destruction on a 90 mph yump over some Knockalla crossroads. The car snapped a Bilstein shocker on its firm landing and took off at a tangent, glancing off various roadside objects which smashed the wheel rim right into the tyre. Everything stayed airtight when we landed a second time and both car and adrenalin proved sufficient to finish the stage competitively.

Sadly, there was worse in store on the same stage for John “Biggles” Scallon, one of several Irish drivers to share service facilities with the visitors. His Equipment Sales entered RS2000 crashed heavily after a note reading error and was emulated soon after by teammate Inurietta who, plagued by handling problems, assaulted a wall on Atlantic Drive. A big disappointment to the service team who had also looked after a couple of emergencies on my own car.

As Sunday wore on and punctures slowed both Coleman and McCartney, Warmbold eased his way ahead with the song of the 16 valve Formula 2 BMW engine delighting the huge crowds. The sweeping Knockalla coast road caught out Jack Tordoff in a rare moment and he smote a rear wheel rather than risk the 300ft cliff drop. Considerably farther down the ﬁeld, Melanie Fitzgerald-Smith’s unsponsored Avenger GT took the ladies award, despite brake and exhaust defects, while Jean Denton in the Group 2 Huxfords/Listerine Fiat 128 had to be content with a large share of championship points.

Despite its tough challenge, the rally seemed to end far too soon back at Letterkenny, where the traditional ecstatic prize-giving ceremony was followed by a Radio Luxembourg-sponsored disco dance. The general feeling was that the Donegal richly deserves a higher status in the European series and that Warmbold’s win (worth over £1,000) will do much to increase foreign support.