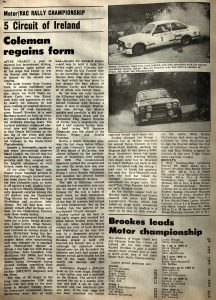 AFTER NEARLY a year of talented but inconsistent driving, Billy Coleman again pulled out all the stops this Easter to win the Benson and Hedges Circuit of Ireland for the second year
running.

The quiet farmer from County Cork, to whom confidence and concentration do not come naturally, drove his Ford Team ex-Monte Carlo two-litre Escort with style and aggression to win by nearly six minutes.  In 2nd place, making an inspired recovery from two off-road excursions, came Russell Brookes in a new Boreham-loaned car built up virtually to Coleman’s speciﬁcation by the Andrews Heating team. The Leyland salesman conquered electrical, tyre and brake problems to beat Dessie McCartney on the last leg of the event and take a three-point lead over the absent Ari Vatanen in the 1976 Motor/RAC Championship.

Despite a favourable report by last year’s International observer Mauri Lindell, the Circuit was not upgraded in the European Championship and this, coupled with the English reluctance to visit Ireland, made for a weak entry.

Of the other “big four”, only Dealer Team Vauxhall arrived in full strength though Leyland number three driver Pat Ryan entered his own Dolomite – only to write it off against a wall, slightly injuring co-driver, Martin Holmes. The only pleasant surprise among the 101 starters was the Chequered Flag Stratos for Swede Per-Inge Walfridson and co-driver John Jensen. The car had been completely rebuilt after its huge accident on the Cheltenham Festival only three weeks before.

The Porsche-powered Irish stars were out in force. Dessie McCartney, Cahal Curley, Brian Nelson, David Agnew and Ken Shields all had Carreras in various states of tune, McCartney being the favourite for a win until his 280 bhp engine failed after scrutineering and was changed for a standard unit. Home-grown interest in Group 1 ran high too with Ronnie McCartney, Sean Campbell, John McAlorum (RS 2000s) and Robin Eyre-Maunsell, John Coyne and Robin Lyons (Avengers) facing limited visiting opposition from Henry Inurrieta (RS 2000), Jimmy McRae (SMT/DTV Magnum) and Pat Ryan.

The first of 58 stages in the long and expensive 1500 mile route was just next to the start ramp in Bangor, County Down. To everyone’s amazement, Dessie McCartney went into an early lead – despite his standard engine – and was to hold it well into Friday night until Coleman suddenly made his bid.  Fastest time by an incredible 40 secs over the famous Sally Gap shot him into the lead which he was never to lose despite the best efforts of Brookes, Curley and Walfridson, all of whom took fastest times.

By the time the rally reached the Killarney night halt on Saturday, McCartney was two minutes behind Coleman with Brookes a mere 11 secs in arrears. Walfridson was driving the Stratos quickly and carefully in 4th position, two minutes down, and the Chequered Flag Team’s Porsche of Curley was a neighbourly one and a half minutes further back. A hard-trying Will Sparrow (Magnum) was 6th ahead of the Nelson, Evans and Shields Porsches.

Borlin, a classic mountain pass, was the last stage before Killarney and Coleman’s fastest time, 22 secs ahead of McCartney, was almost eclipsed by the performance of Inurrieta’s tired looking RS 2000. The London-based Spaniard pushed the unsponsored car over the seven-mile test nine seconds faster than eventual Group I victor Ronnie McCartney and equalled the seventh fastest time of Walfridson’s Stratos.

The talk at Killarney centred around the low mortality rate over the 23 stages to date in a rally famous for the toll it takes on hard triers, by both mechanical and natural hazards. Only three of the first 30 starters had retired – all with breakdowns.  But on the Sunday run, the pattern of the sun-blessed Circuit changed.

Curley turned up the heat on the early stages and reached 3rd place before broken steering put him out, while incidents nearly robbed the rally of both Brookes and Walfridson on the very ﬁrst test. In a desperate attempt to wrest 2nd place from McCartney, Brookes struck a bank and bounced his Escort into a ditch. Although he restarted almost immediately the jolt disturbed the electrics and both fuel pumps and battery switch gave trouble for the rest of the stage, losing him nearly six minutes and four places.

Walfridson clipped a different bank on the same stage, breaking a rear radius arm and a halfshaft on the Stratos. The service crew reached the car at a nearby junction and sent it on its way 85 minutes and one maximum penalty later. If the next stage had not been cancelled the Italian supercar would have been out.

Sunday changed the Group I picture too, as McRae executed his second flying moment in two Motor/RAC Rounds, parking his Magnum just 30 feet down a 300ft drop.  Inurrieta’s brave try came to an end with steering failure two stages later, but he returned to winch McRae’s car back to the road. Campbell took the Group 1 lead only to break his gearbox the next day. Eyre-Maunsell took over the lead but rolled his Avenger comprehensively into retirement six stages later. Brian Nelson’s Tuca Tiles Porsche had been an early Monday victim.

By the Athlone supper halt on Monday night, Brookes had finally claimed 2nd place and Bengt Lundstrom’s Toyota which had rolled on stage three, completed an eventful rally by landing in a river on its way to 16th overall.

At the Lame finish Ronnie McCartney had sewn up Group I followed by John McAlorun and to cap the English defeat, the Irish team of Coleman, Dessie McCartney and Ken Shields eclipsed the visitors in the new Triple Crown Inter-regional contest.