This article is reproduced from Auto Ireland Magazine No2 1976.  The report is by Brian Foley and the photos by Paul Phelan, unless otherwise noted. 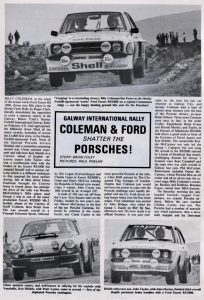 BILLY COLEMAN, at the wheel of the actual works Ford Escort RS 1800, driven into fifth place in the Monte Carlo Rally by Roger Clark, literally demolished the opposition to score a runaway victory in the Galway Motor Club’s Henley Forklift International Galway Rally on February 6-8. And appropriately the Millstreet driver lifted all the major awards, including of course the £1,000 first prize, in the Henley Forklift-sponsored Ford.

None of the fancied Porsche drivers finished. and a somewhat surprising second was Ulster autotest exponent and rally-man Ken Shields in a Carrera; ahead of English rally-cross expert John Taylor, who had a troublesome time with the brakes of his Escort RSl800 but
adapted himself well to tarmac rallying which is a different technique to that required for loose surface driving.

Isle of Man driver Denis Easthope brought his Carrera home in fourth place, but perhaps the drive of the rally was Ronnie McCartney’s fifth place and Group l win in one of the latest production Escort RS2000 Mk.2 models, ahead of the Carrera of Geoff Crabtree. Ron Smith from Fife was seventh overall in a Triumph Dolomite Sprint, followed by Jim Logan (Carrickfergus) and Charlie Gunn in Escort RS2000’s. Gunn and Harry McEvoy winning the Republic of Ireland crew award. Class 3 winner, John Coyne was 10th overall in an Avenger GT.

A total of 102 cars set off from the 5 p.m. Eyre Square start on the Friday. headed by last year’s winner, Dessie McCartney in the first of the ten Porsche Carreras, followed by Coleman in the works Escort and Cahal Curley in the most powerful Porsche in the rally, a 3-litre RSR entered by The Chequered Flag Garages of London.

Doubts that Coleman just would not have the power to cope with the Porsche challenge were rapidly dispelled with the Co. Cork driver setting fastest times over the first three stages. First retirement was posted by John Bridges. who rolled his Group 1 Escort on SS1! By Sunday afternoon only 50 crews made it as official finishers.

It was past midnight by the time the last car returned to Galway City, and already Coleman had a lead of almost three minutes over the best of the Porsche drivers, ex-racer Brian Nelson.  Three more Carreras were next in line,

in the order Curley, Englishmen Brian Evans, and Harold Morley: and Taylor, in the Haynes of Maidstone RSl800, held down a good sixth in front of the Porsches of David Agnew and Ken Shields. The remarkable Ronnie McCartney not only led the Group 1 Category but was lying 9th overall in the RS2000 entered by Lloyds of Stafford. But closely challenging Ronnie for Group 1 honours were Sean Campbell and the man who was sixth overall in Galway last year, Phil McCartan.

Retirements included Dessie McCartney, whose Porsche blew an oil cooler and all its oil on only the second stage; Billy Coleman”s cousin, Jer. Buckley and Dubliner Brendan Fagan retired their BDA-Escorts

On Saturday morning the rally headed towards rugged Connemara, not exactly Porsche territory. Before the cars reached Clifden, Curley was out.  The Porsche had a number of nearside rear wheel punctures, then a drive shaft snapped and the Derry-man spun into retirement.

Harold Morley hit a wall on the bumpy Oughterard stage — exit another Porsche!

The leading Escort had a lunch menu of new drive shafts: and the leaderboard showed that behind Coleman lurked the four Porsches of Nelson, Evans, Agnew and Shields; Ian Corkhill. another Isle of Man driver, had his Escort in sixth spot, and the Cork Crew of Mick and Ann O’Connell recovered from a lowly 23rd spot, after suffering alternator trouble the previous night, to slot into seventh position.

The Group l battle continued unabated with Ronnie McCartney still heading Campbell and McCartan: and John Taylor had dropped back to 11th, the result of more brake problems and consequent loss of six vital stage minutes. David Lindsay. Hugh O’Brien and Robin Lyons in
Escorts and Bernard Banning (Avenger) joined the growing list of retirements. Evans set out to overhaul Nelson after the lunch break. but shortly after taking over second spot, he spun on the infamous Oughterard 15-miles stage and split the oil tank.

A Porsche win, that looked such a distinct possibility twenty-fours previously. was rapidly becoming less and less of the much predicted happening. There was just no way that Nelson could catch the flying Coleman — unless either the works Escort broke or Billy did it all wrong. But it was Nelson’s Porsche that broke, the much-modified Carrera retired at the end of the final Saturday stage, Moycullen, the trouble diagnosed to a broken rocker in the Flat-6 engine.

When the results were announced back in Galway, it was only to stamp the official seal on the smiling faces of Billy Coleman and his navigator, Jim Porter who had a devastating lead of almost 10 minutes over David Agnew, and only eighteen seconds down on the second man was Shields. Ian Corkhill found himself elevated to fourth, in front of his fellow Manx Islander, Easthope. The O’Connells were lying sixth, with Taylor’s determined bid to get back to grips with the proceedings rewarded by seventh spot.

Ronnie McCartney was being hotly chased for the Grp. 1 class by McCartan who had started the morning with a deﬁcit of 71 seconds and closed the gap to a really challenging 19 seconds. The ‘off’ on the Oughterard stage on the second time around — all the Saturday morning stages being run in the opposite direction in the afternoon.

Rain, for the ﬁrst time over the weekend, made the early stages rather slippery on the Sunday run in the Tuam area. Coleman was obviously in no hurry with such a commanding lead; but Agnew and Shields were hotly disputing second place, and O’Connell was determined to hold off the strong challenge of Taylor.

On the third stage, Hillwood. Mick O’Connell crashed the Escort RS very heavily, and what could have been a brilliant second overall, regrettably ended with his wife Ann taken to Tuam hospital with a broken leg. The
Cork crew were running a No. 26. but the first news of the seriousness of the accident was brought by crew No. 96 Des Brady/Paul Gleeson. Paul spotting Mick’s distress signal for an ambulance which they duly summoned from Tuam.

Agnew too was trying too hard and two stages later he clobbered a wall and retired the Porsche with a rear corner damaged. Now Shields’ second place was threatened by Taylor, but the Ulsterman kept it all together to come in 8 minutes 20
seconds behind the winner and 1 m. 6 s. in front of Taylor. Corkhill put his Escort off on a stage and could not get it out of the mud, and Manx honour was upheld by Denis Easthope in fourth place. Phil McCartan, Ronnie McCartney’s big challenger for Group 1, was excluded for lateness, the result of a servicing cock-up when someone crossed the plug leads and the car would not start!

As usual, the various classes had their stories of success and hard luck, overshadowed by the big guns and the battles for top overall placings. In Class 1, the VW Golf had a successful Irish rally debut, in the hands of Larry Mooney; and the Audi-VW Team of Mooney, Paddy O’Callaghan (Audi 8OGT) and Frank Hogan (Beetle) were the sole surviving trade and club teams.