This report is reproduced from a Belfast telegraph item published in October 1977.  The report is by Sammy Hamill with photographs from Derek Smyth’s collection. 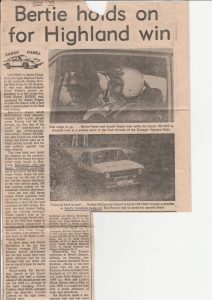 Bertie holds on for Highland win

It was a victory for Bertie Fisher in the Donegal Highland Rally at the weekend, beating Ronnie McCartney by 26 seconds. It was only Ballinamallard driver Fisher’s second appearance in a full group four Ford Escort RS18OO and partnered by Austin Frazer he ends the season with a first and a second-place overall in his final two outings.

Bertie’s duel with McCartney was eagerly awaited after Larne garage owner Ronnie had led him through the first day of the Cork ‘20’ International a month ago. Unfortunately, McCartney’s Escort RS1800 was then forced out with bent valves and Fisher went on to finish second overall. But the rallying public’s appetite had been whetted.

This time both cars lasted the distance on the compact White Strand Motor Inn sponsored event based at Buncrana. McCartney, who had Beatty Crawford co-driving, led at the end of the first stage where Fisher broke the anti-tramp bar on the rear of his car. The time taken to effect the repairs necessary at the next service point left him running almost on his maximum lateness allowance.

Over the next half dozen stages, Fisher gradually built up a lead of nearly a minute, helped by a brief off the road excursion by McCartney. But with the back brakes fading and the steering damaged Fisher couldn‘t keep up the pace and the gap shrunk sharply in the final four stages as McCartney launched a counter-attack. It was too late however and Fisher brought his Lindsay Cars entered Escort back to the finish a convincing winner.

In third place was Derek McMahon in his two-litre Chrysler Avenger GT, two minutes behind McCartney but the gap would have been much narrower had the big Donegal man not stuck the
car on top of a bank for nearly a minute.

Manx-exiled Pat Barrett was fourth in his Escort RS1800, just half a minute ahead of the second group one car, the 1600 c.c. Avenger of the hard-charging Trevor Cathers. Noel Smith, unhappy
with his three-litre Porsche Carrera on the tight lanes, finished sixth.

Roy Alcorn (Escort RS1600) and Fred Patterson (Escort RS2000) took seventh and eighth places in the official results list but they would have been fourth and fifth respectively but for incurring a two-minute penalty for checking into a time control too early!

Bertie Law in his Vauxhall Magnum was ninth and George Robinson in his Escort 1600GT completed the top ten.

Three notable non-starters were Hugh O’Brien, Winston Henry and Robin Lyons. O’Brien and Henry damaged the engines of their Escorts on the Scallon Cup rally on Friday night while Lyons was ill.

Another Lyons, John, retired on the first stage for the second week in a row, this time with mechanical trouble in his Peugeot 104ZS while Tommy Reid crashed his Escort RS2000 out after eight stages.