This report is reproduced from Car Sport Magazine November 1982. Pictures by Harold Moffett unless otherwise stated. 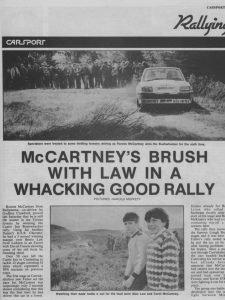 McCartney’s Brush With Law in a Whacking Good Rally!

Ronnie McCartney from Ballymena, co-driven by Godfrey Crawford, proved last Saturday that he is still the master in the Tyrone forests by winning the Castle Inn Bushwhacker rally.

Using his brother Dessie‘s HSR Chevette, he had a 5-second winning margin over Bertie Law from Lisburn in an Escort with David Francis showing some of his old form by finishing third.

Over 50 cars left the Castle Inn in Castlederg to tackle 12 stages covering 35 miles which represents a 50% increase on previous years.

The first stage at Carrickaholton saw Fisher set the pace but McCartney was surprisingly only 2 seconds slower considering that this was the first time he had driven this car in a forest.

Drama already for Robin Lyons who rolled his Sunbeam shortly after the start of the stage and Henry McKinstry who had a time-consuming slip-off a few corners later. The rally then moved to the famous Lough Braden stages and it was here that Fisher’s rally ended when he put the car on its side after having problems with his brakes.  After a second run through Carrickaholton, the cars headed back to Castlederg for service and it had already become apparent that McCartney had settled into the strange car and had opened up an 18-second lead over Law.  Francis and Kevin O’Kane were fighting it out for the third place.

The group one battle had developed into the usual fight between Mickey McMenamin and Robbie McGurk, both of these drivers separated by one just second and both contesting 6th place overall. An amazing feat considering they are only using 1600cc engines. Unfortunately, McGurk retired a few stages later with a broken axle.

After service, the action headed to a loop of the Baronscourt stages and it was here that Law really started to apply the pressure.  By second service he had opened up a 2-second lead on McCartney who had to drive one stage with a broken shock and also had the disadvantage of running the first car through these slippery stages.  It was also here that Kevin O’Kane really got going and was setting stage times equal to Law and McCartney.

After second service it was a re-run of the morning stages in the reverse direction.  On Carrickaholton McCartney had a heart-stopping experience when the engine went completely off tune.  He struggled to the end of the stage only to find a plug had come completely loose.  This repaired, the engine was on tune again but Law now had a 7 second lead with only three stages to go.  Could the vastly experienced McCartney do anything?  Anyone who saw those last stages, especially Lough Braden, will have witnessed a display of forest driving which was never seen before in this country.  McCartney closed the gap and finally overhauled Law.

David Frances held on to third with a hard trying Kevin O’Kane taking fourth.  In fifth place was Ken Irwin in his well driven 1600cc Sunbeam and sixth was eventual group 1 winner Brian Grant.  The class for small engined cars was won by the lowly seeded Stephen Cuthbertson, obviously out to justify the new sponsorship deal he has received from Wilson Bros., the plant contractors.  Starting at car number 53 he finished in 18th place overall.  The group one up-to 1600 cc class was won by Mickey McMenamin who also finished 7th overall.

Probably one of the most creditable performances of the event was that of Charlie Irwin, younger brother of Ken. Charlie has always been respected as one of the top autotest drivers but in this, his first-ever rally, he finished 4th in his class and 13th overall.  Given a bit more experience he could become a driver worth watching.

But in the end it was McCartney’s day.  He had come to the event in an unfamiliar car, competed against the best drivers in this country and proved once again that he is still the man to beat in the forests.  He has now won the Bushwhacker Rally for the sixth time, a record which is likely to stand for a long time – unless Ronnie himself wins next year again!

The prizes were presented by the proprietor of the Castle Inn, Dr. Billy Wilson, and the Clerk of the Course Seamus McCanny also thanked all the other sponsors who sponsored individual stages.