After a week of scorching weather, Dungannon Motor Club had to contend with roaming thunderstorms at their Carling Black Label Autocross, held on Wednesday, June 10th.  This was, of course, the first round of the Ulster Autocross Championship, and as such created quite a lot of interest. All the top names were present, with the exception of Dessie McCartney, who was on honeymoon, and a good evening’s sport seemed guaranteed. 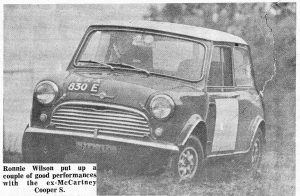 That was before the weather broke.  Unfortunately, a goodly quantity of much needed, but rather untimely rain made things very slippery indeed in the rather hilly field, and though a large crowd still came, proceedings were rather late in getting underway, with the result that it was not possible to complete the second runs before darkness fell completely.

Practice was noticeable for the way in which almost everybody left the course at one time or another, the uphill, off-camber section at the back of the course being very difficult to ‘negotiate, particularly for rear wheel drive cars, as Ronnie McCartney and Bert Reid both discovered.

The going being damp, and traction being of maximum importance, Beach Buggies had something of an advantage, and when the first official runs were over it was announced that Tommy Murray’s yellow Buggy was in front after a highly respectable run in 2-36.4 secs. Also very rapid was Ron Patton’s incredible Mini Sprint which did a 2-37.0, and while Ronnie White might well have got “in among ’em” with the familiar, but now quicker than ever red Cooper, he collected a marker or two and dropped himself out of the running.  Ronnie never seems to have much luck in the first event of the season, for at last year’s Dungannon epic, he had gearbox bothers on his first run and retired.

Despite the somewhat slippery going, the rather peaky 1000cc Minis seem to go better than their bigger engined brothers, and the three award winners in this class, Ron Patton, Hubert Smith and Will Farren all featured strongly in the top ten overall.  Class 2, saw Mike de St Paer going rather better than previously with his “purple people eater” Mk I Sprite to win from Bill Taylor and Rodney Burrows, while Tom Murray, not surprisingly won Class 4 with his Beach Buggy.  Brian Rowan (who was third fastest overall) was second in the car he shared with Roy McBurney.  Andy Irwin won the “big Mini” class from John Chambers and the smooth Mervyn Johnston, and Ronnie Johnston took Gerry McNamara’s Escort TC to a win in class 6, with M. Smith, and “Gerry Mac’ himself in the next two places.  Johnston also scraped the Escort into the top 10, despite the adverse conditions.

The VW/Imp class saw another Murray doing the winning, Jack this time, whose Beetle shared the 2-46.4 mark With David McCullough’s Imp. Pat Speer drove a standard Imp Sport with much verve to take third place a good bit behind.

So much for the first runs.  In general the second time around, the quick men looked quicker, and the issue would have been in doubt right up to the last, but for the fact that it got dark, and despite the valiant efforts of some of the later runners to motor round with headlights full on (quite a spectacle this!!).

Clerk of the Course Gordon Taggart eventually decided to abandon proceedings, and base the results on one run only, a wise decision, particularly in view of the fact that spectators were taking advantage of the dark to creep right up to the edge of the track, and were defying the marshals’ attempts to put them back behind the ropes.

So ended the first autocross of ‘the season.  A Beach Buggy won, and it could just be that it won’t be a Mini this year.  It’d make a change wouldn’t it?  Special mention must be made of Ian Ferguson for his very rapid driving of a perfectly ordinary Mini.  What would he be like in something a bit quicker one wonders?